This year's National Garden Guide for Australia's Open Gardens is out now. The launch of the 2010-2011 program of open gardens will be at Burnley College in Melbourne in a couple of weeks. As part of this year's scheme, the productive garden I designed and created with my friend Sophia will feature on the weekend of February 5-6 2011 as part of a special focus on culinary gardening. Sophia's garden is mentioned on page 105 and 107 of the guide which is available on-line at www.opengarden.org.au/guidebook.html. Soph and I are excited to be able to open her garden to the public, especially at the height of summer when we hope the garden will be lush and bountiful, unlike now where it is wintry and pretty bare, with only the Broad Beans really powering away. 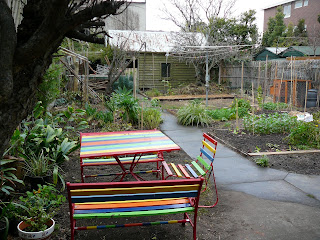 I'm going to keep up my weekly photos of the garden from now until to February to document how the garden evolves over the next few months. As described in the Open Garden Guide, Sophia's garden will have all the unusual plants discussed in this blog, as well of plenty Asian vegies and for the first time this year, edible water plants. The aim of the garden is to make it both productive and attractive; we're keen to show that with judicious planting of perennial edible plants in amongst standard crops such as tomatoes and corn you can have your designed ornamental garden and eat it too! 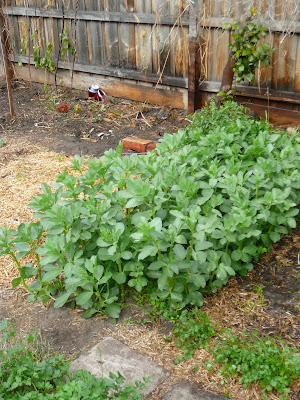 Posted by People Plants Landscapes at 5:10 AM