I was amazed last week to discover that two Jicama plants I plonked in the ground late last year had actually produced tubers. Jicama or Mexican Yam Bean is a tropical, climbing bean from Mexico grown for its big, turnip-like roots rather than its bean pods. Although it looks like a normal climbing bean, the flowers and pods are poisonous and contain rotenone. I grew my two specimens in late spring so they were still quite young plants by mid Summer and for some reason I discounted the idea that they would produce the big "yams" by late autumn. I had scratched around a bit in the soil and had felt nothing and so hoped that the plants would re-sprout and produce good sized roots for 2011. 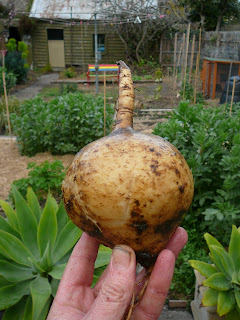 Then I got to try Jicama for the first time when I bought them at the Asian produce section of the Preston market. They are delicious, crisp and sweet, and really moreish. So I had one last ferret around my own two plants and sure enough quite deep down I discovered great big swollen roots. I dug one up and was pleased to see that it was as big as the ones I had found at the market. Unfortunately, the root was cracked and had begun to decay, brought on by our cold, winter winter. But I'm sure if I had dug this one in autumn before winter has set in, it would have been fine. So there you have it, another tropical plant that can be ground well outside its range in cold, old Melbourne.
Posted by People Plants Landscapes at 10:41 PM