It's hot again in Melbourne this week although it won't head into the 40s again thankfully. I love summer and the long evenings but I have begun to dream a little of autumn already. One of the plants that I look forward to seeing flower as summer fades away is American Ground Nut, Apios americana. This is another one of these rare gems here in Australia, obscure to us and very hard to find in cultivation. I first read about it in Eric Toensmeir's Perennial Vegetables and liked the idea of an easy-to-grow climbing bean with a potato like tuber that would form long term colonies and never disappear. (For a great overview of Apios americana see http://penstemon.wordpress.com/2011/10/13/hopniss-or-groundnuts/.) 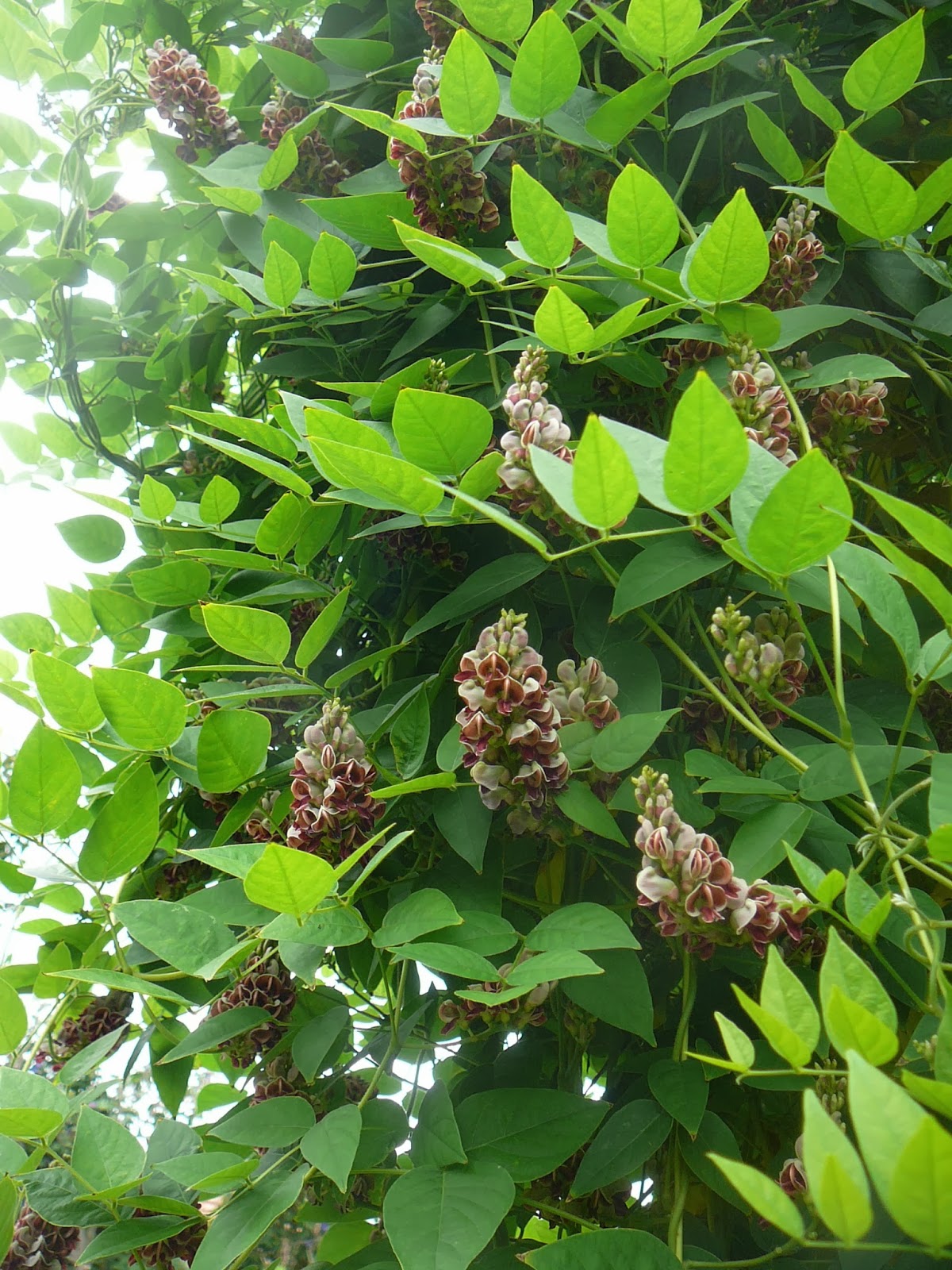 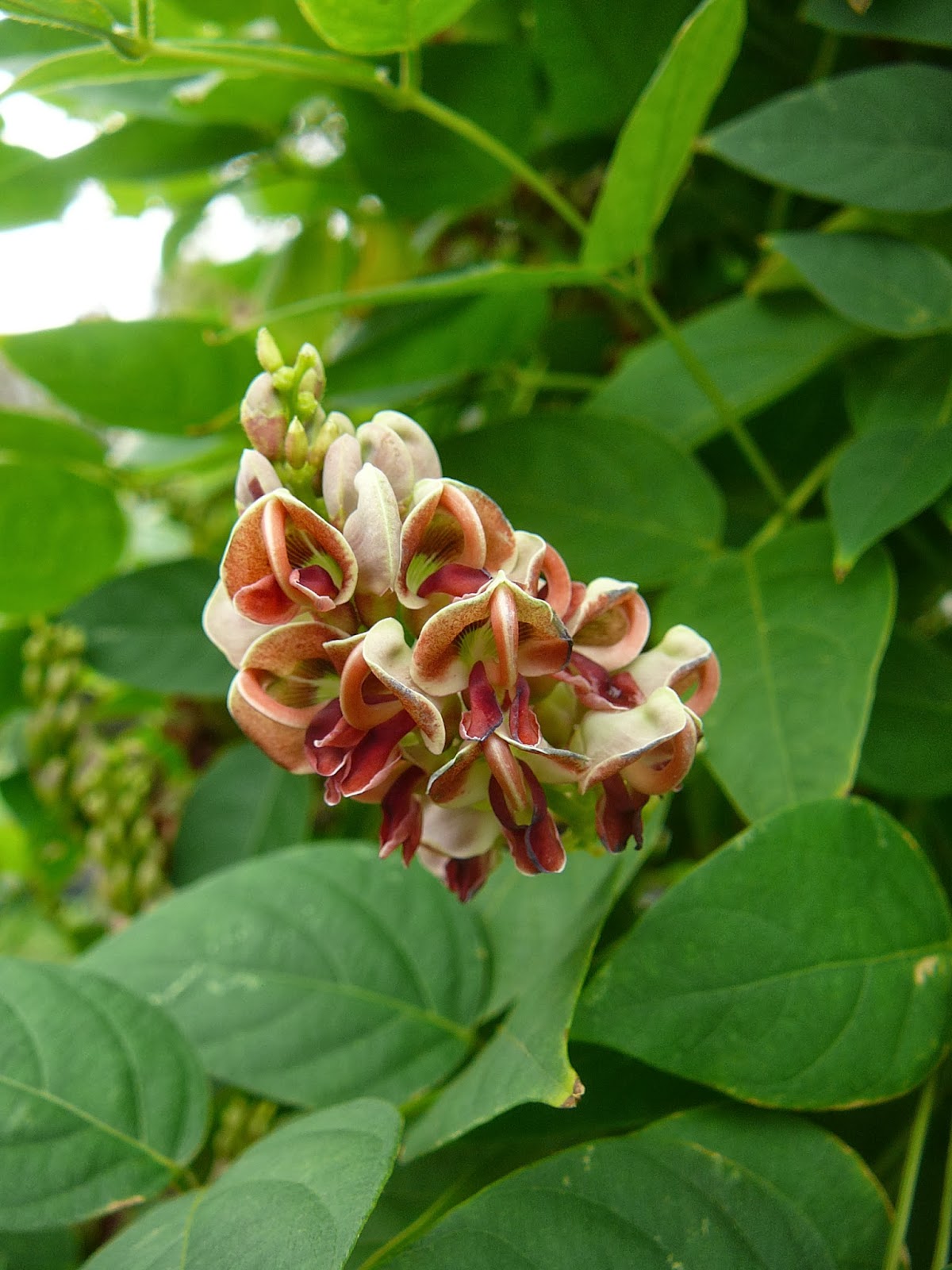 But where to get any in Australia? As with so many obscure medicinal and culinary herbs and vegetables here the only supplier was Isabell Shipard in Nambour, Queensland. In the winter of 2010 I bought various species from Isabell and American Ground Nut was one of them. Out of the package she sent down was a small forestry tube with no foliage. As Ground Nut are deciduous this was OK and when I potted this specimen on the small ground nut itself was revealed. I lived in a flat at the time which was incredibly cosy and warm in winter with a large north facing window which let in lots of sunshine. (I really hate to think what it was like during our recent heatwave - it truly was hellish in summer.) Plants took off early on the window sill and the Ground Nut emerged quickly with a thin shoot. 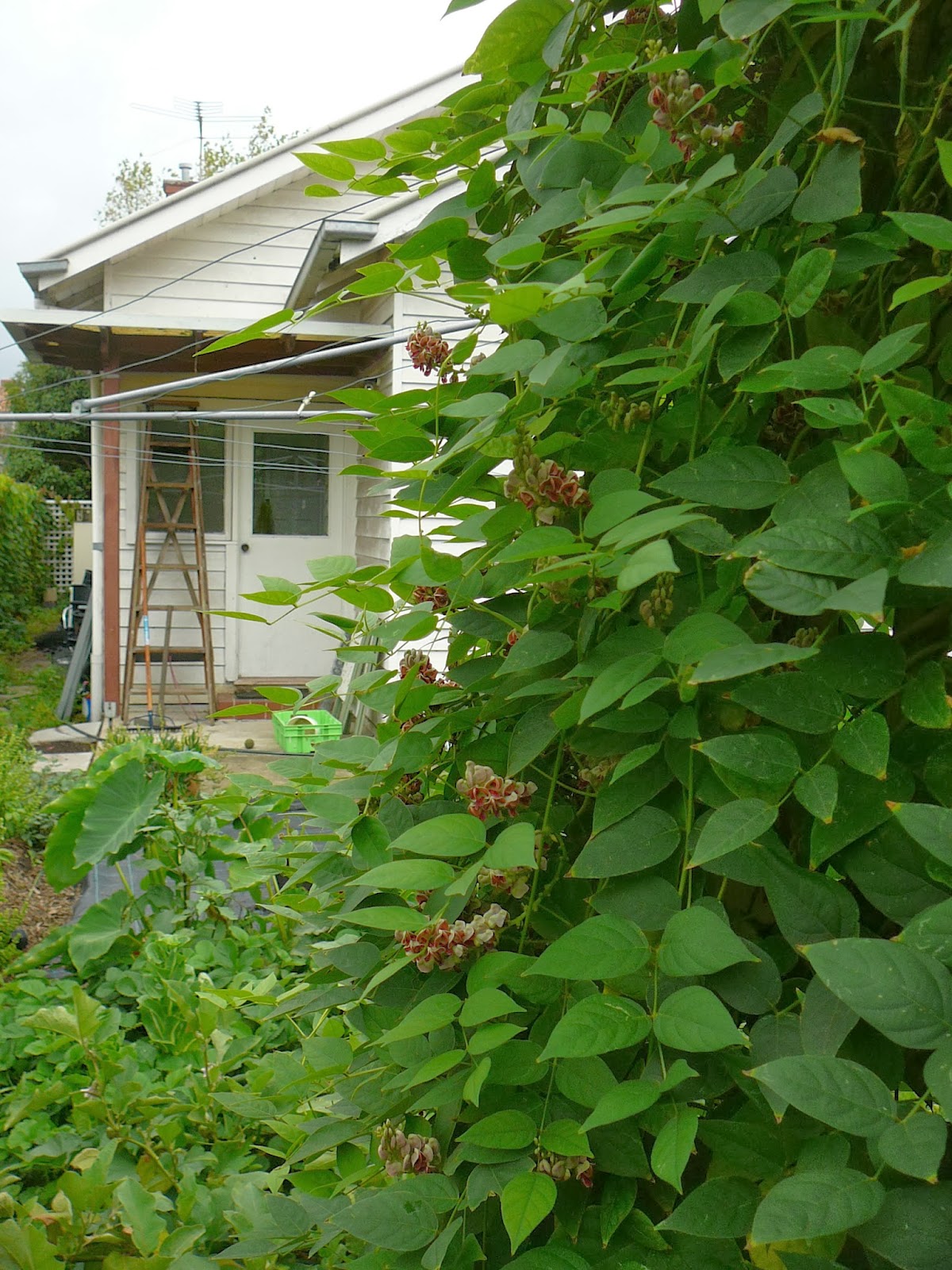 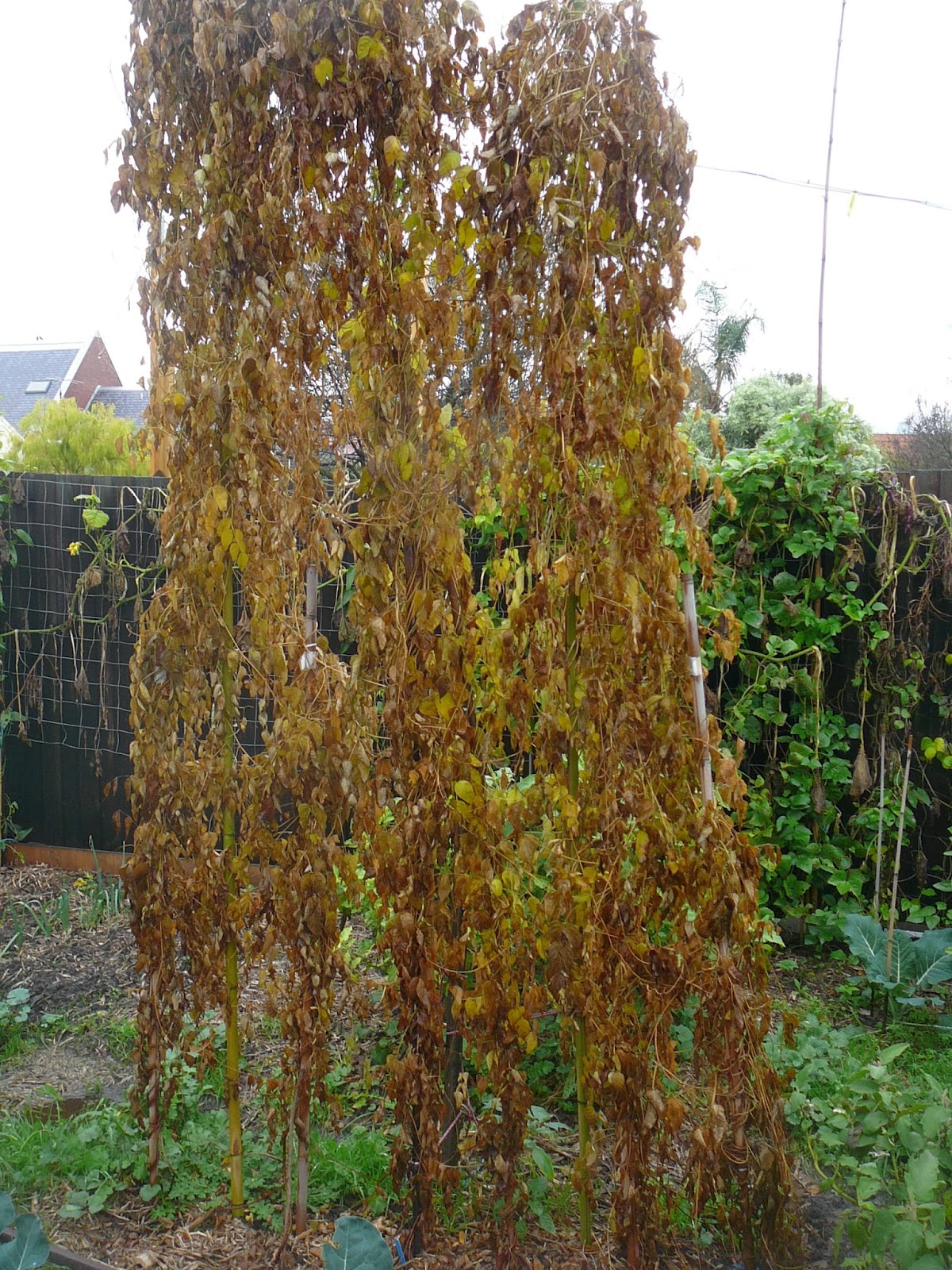 This single specimen was planted at Sophia's garden and established itself quite well over the growing season. In autumn 2011 I dug up a few small ground nuts all growing along the roots like balls on a string and felt reasonably happy with this, thinking that these could form the basis of one of these ''colonies'' that Eric Toensmeir and others talked about. Given the relatively small size I thought that over time I could create enough plants to have a kind of novelty foraging zone with some tasty tubers but not a serious crop. 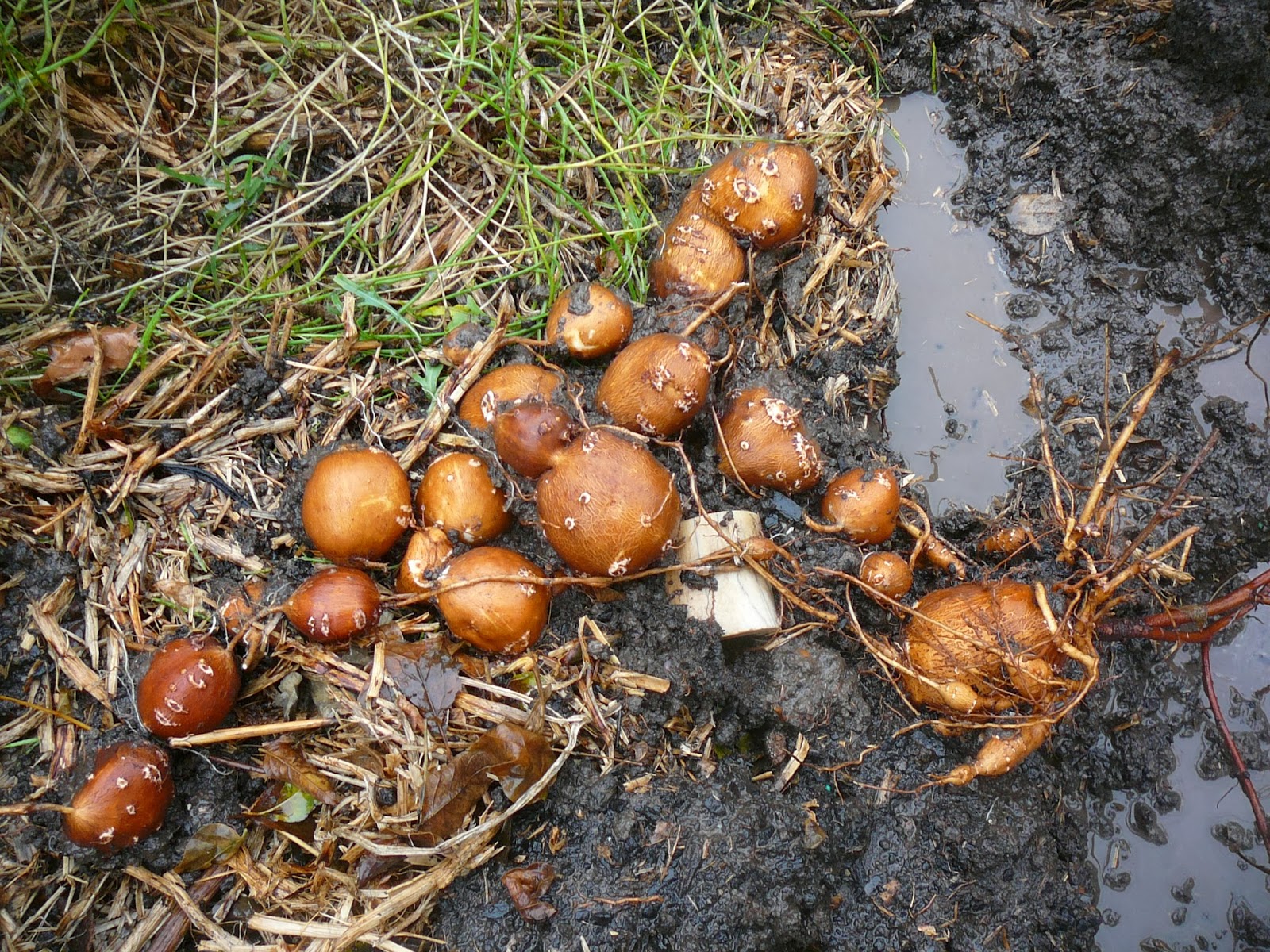 But then in spring of that year I noticed those thin emergent shoots of ground nut popping up everywhere at Sophia's, metres from where the original plant had gone in. I carefully transplanted these to my garden and over 2011-2012 these plants grew very strongly producing much bigger and more prolific tubers that I found delicious and a much more serious crop than I had ever anticipated. The better growth is attributable to the clay loam here in Alphington which retains moisture for much longer than the sandy loam of Armadale. For 2012-2013 I established a line of bamboo poles for the ground nuts and they produced a bumper crop with large, potato sized tubers. 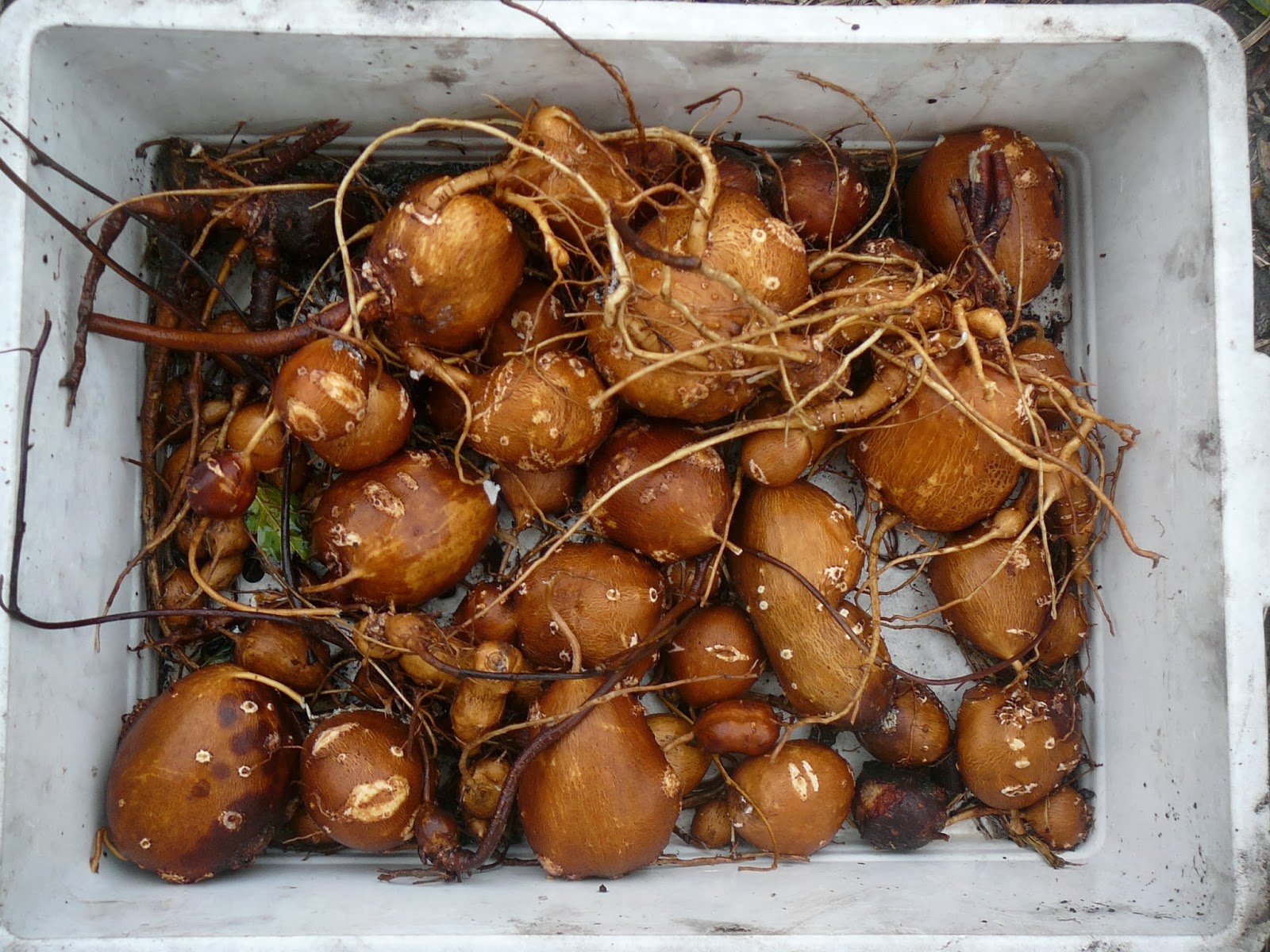 The autumn flowers on these plants are a seasonal highlight. They are bronzey, pale red and held tightly like a condensed wisteria flower. Once flowering is over and nights gets colder, Ground Nut foliage slowly begins to yellow off and by the time winter has arrived the lush green leaves have collapsed into a yellow sludge and fallen off - this plant is seriously and spectacularly deciduous! The other exciting thing about last year's crop was I managed to get two seed pods from the flowers (with two seeds saved) and I now have one baby Ground Nut plant from seed with another on the way I hope. Growing these plants from seed (via clonal plants produced from that one original tuber from Isabell) introduces some limited extra genetic variability into the mix. I'd love to import the various varieties that have been produced in the USA and I'll investigate that possibility. Meanwhile, my plants and the ones now growing at the Burnley Campus of the University of Melbourne and in a couple of community gardens all come from that first tuber.

Posted by People Plants Landscapes at 11:01 AM No comments:


This year I have around 20 sweet potato plants in - four purple ones, two of a variety unknown and 14 orange Beauregards. These have all been growing well and went bananas during last week's heatwave. Melbourne had four days in a row over 40 degrees celcius, or 104 Fahrenheit + , namely 43, 42, 44 and 44. At night the temperature stayed in the mid to high twenties. Quite a few plants in my garden were scorched including my favourite the Abyssinian Banana which finds itself fried at least twice a year, either by frost or extreme heat. (It always bounces back though.) Anyway, as I was saying the Sweet Potatoes put on strong growth during the heatwave even though I'm sure no plants really like 44 degrees. The purple sweet potato is from cuttings I took from Karen Sutherland of Edible Eden design last winter (see http://edibleedendesign.com/blog/ )while the Beauregards are from my own stock. The mystery variety is from slips sold as leafy greens at the Preston Market. The photos below show various stages of growth over the last 6-8 weeks. I think the mystery variety may turn out to be the white skinned but purple inside type sold at the Preston Market and elsewhere.
Posted by People Plants Landscapes at 12:50 AM 2 comments: