Sophia's Food Garden Sanctuary will be open next February 5 and 6 through the Australian Open Garden Scheme (see page 105 and 107 of the guide - "Australia's Open Gardens"). Soph and I have planned many of our growing season's plantings around these dates with the aim of having many of the food plants still looking relatively fresh well into summer - that's what we hope at any rate. As it turns out, the wet cold start to spring has slowed things down anyway.

We harvested potatoes and broad beans in the middle of November. I like planting potatoes in the middle of winter because in frost free areas like Armadale potatoes shoot quickly through pea straw mulch and become healthy plants despite low winter temperatures. In Sophia's garden I grew them under under a bare, wintry looking fig tree and by the time the fig burst back into life we had well-established plants and delicious 'new' and mostly mature potatoes (see picture.) The broad beans were also great and I've dug the plants into the ground or used them as mulch for tomatoes and corn. 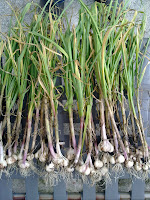 The rain has been so consistent and intense that low lying parts of the garden were turning into a mini-wetland and I have had to resort to raising beds in these areas and bringing in plenty of surecrop compost. This has been such a turn-around from the last two years of drought where these 'wet' sections of the garden grew fantastic zucchinis and eggplants without irrigation. I've also had to harvest garlic early to stop it rotting. Leeks, as you would expect, have thrived but this has been and will continue to be an unusual La Nina year.
Posted by People Plants Landscapes at 9:14 PM No comments:

As described in my previous post, I went to Vanuatu this year and it inspired me to grow Taro in Melbourne. Strictly speaking, I should say that it inspired me to grow it again as I had tried half-heartedly in 2009 without ever having eaten the final starchy product. I had bought a few corms at a green grocer's in Sydney Road and plonked them straight into a pot. They grew really well during last year's hot and humid summer and then promptly melted into greeny-brown sludge once a few cold nights arrived in autumn. Once back from Vanuatu I looked into this original pot and found that quite a few side-cormels had been produced. The original corm or bulb was about the size of a cricket ball, while the new cormels were golf-ball sized. I boiled a few up and they were fine. But it would be great to grow big sized taro in Melbourne too. And that is this growing season's quest.

We've had such a slow start to the growing season, but now after in one week of summer we've had warm, humid nights and hot and rainy days - perfect Taro weather. I've bitten the bullet and planted several Taro plants in the ground, in the expectation that we're going to have a wet summer.I hope so. Taro is such an attractive plant that I am happy for it to be in the garden no matter what it produces food-wise.

Oops...I don't have any recent shots of this year's Taro plants...coming up soon
Posted by People Plants Landscapes at 8:39 PM No comments: