Here's another ancient food plant from the Andes: Yacon or Peruvian Ground Apple. The press is that this plant produces large Sweet Potato-like tubers that when washed, skinned and sliced and eaten raw taste something like a cross between watermelon and pear. This sounded intriguing enough to give them a spot or two in the garden. Like many of my exotic vegies last year, I bought propagation material via mail order from Green Harvest in Maleny in Queensland and promptly potted the reddish rhizomes up in late July 2009 when they arrived. 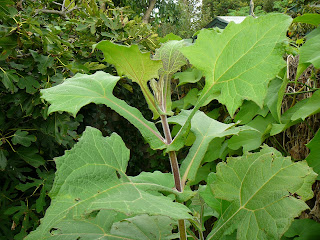 The Yacon didn't emerge until late October but soon developed into attractive plants. I placed five of these in three different gardens in various spots, close to trees or next to other mainstream vegies. They grew well without fuss to between four and six feet, although a specimen growing over concrete was fried (but recovered) after the one and only 40 degree day in Melbourne last summer. I really loved the plants as they grew into a kind of alternative multi-stemmed sunflower. Yacon are, in fact, closely related to Sunflowers and to Jerusalem Artichokes. 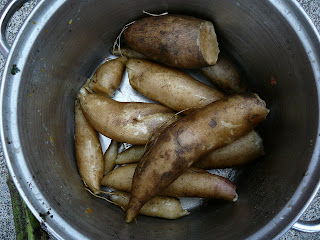 Once they had flowered I waited until late May before digging the tubers up. A couple of plants produced huge tubers which hung off the reddish rhizomes like stuck-on appendages. On first taste (five minutes after harvest) they had a great texture, kind of refreshing and crisp, but no flavour whatsoever! I then gave the tubers the recommended treatment of sticking them on a sunny window sill for a few days until they go wrinkly and this did the trick - a mildly sweet, Nashi pear taste and similar texture was the result. Since then I have cooked them too and in one mixed bake with other tubers the Yacon was delicious, absorbing flavours from other ingredients but staying quite crisp. 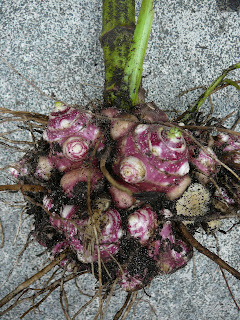