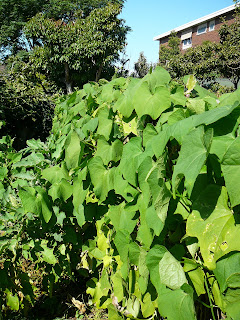 This summer I grew Chokos (or Chayote) for the first time in years. Melbourne gardeners were once advised to used cold tolerant chokos that had more spines than the commercial ones and I had grown this spiky variety in Melbourne in the past. But this time I simply sprouted some smooth skinned Chokos that appeared in the supermarket briefly in late May/early June 2009. The Choko vines grew quickly on a window sill and were ready for planting in early spring. In the end only one went in the ground. It had to compete with a crazed Queensland Blue Pumpkin vine for several months but once the pumpkin burnt out the Choko became the dominant creeper on the fence. Tiny Chokos are only now just appearing but meanwhile I have been eating the young shoots raw and in stir-frys. And they are a revelation! They are nutty and mild and really delicious. The Choko fruits I remember as being a useful filler but not too exciting, so although I'm looking forward to having them, I will grow Chokos from now on for the shoots alone. The next step will be to try the roots which are also meant to be tasty.
Posted by People Plants Landscapes at 1:47 AM No comments: 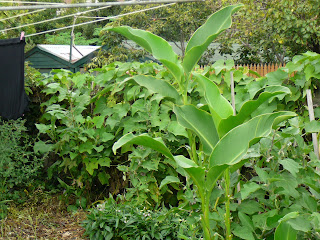 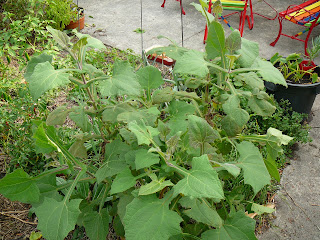 Two years ago an old friend moved from Sydney to Melbourne and asked me to design her a serious vegetable and herb garden. We converted a kikuyu lawn into a vegie patch through heavy mulching with newspaper, cardboard and pea straw, along with some old fashioned digging. The garden has been very productive and well used. But in Winter 2009 I became obsessed with researching "perennial vegetables", in the hope that I could find plants that look after themselves (more or less) and give a stronger aesthetic element to the garden.

I discovered Eric Toensmeir's great book "Perennial Vegetables" and decided that there were plenty of "Lost Crops of the Incas" that would suit the Armadale garden. These were Jicama (pronounced Hikama), a bean grown for its edible roots, Yacon (a bizarre looking sunflower-esque plant that produces sweet tubers), Oca or New Zealand Yam and Achira or Edible Canna. I grew the Jicama from seed but the rest came via the mail through Green Harvest (www.greenharvest.com.au) as tubers for planting.

They're all thriving but except for a tentative nibble at a Canna root I'm waiting for late Autumn before digging them up for eating. In the meantime, here are some photos of the these plants and the garden generally.
Posted by People Plants Landscapes at 2:59 AM 1 comment: