How Vanuatu inspired me to grow Taro

In July this year I travelled to Vanuatu, to the big island in the north, Espiritu Santo. I stayed with friends who are living in Luganville, Santo's capital of 10,000 people, working on community development projects across various islands. I was there for a holiday, to swim, ride and relax which I did in spades, but what fascinated me most about Santo were the food gardens, especially of Taro. A Melanesian food garden is not an isolated planter box in the backyard growing a bit of rocket (for example) but a luxuriant mass of taro, banana, yams, chokos, paw-paws and other easy-to-grow food plants. 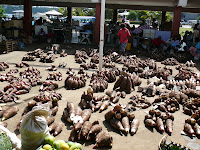 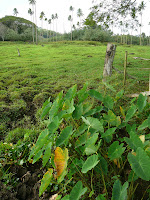 The Taro really stands out and the harvested corms are laid out in the markets and purchased in large quantities. Locals explained to me that there are two Taros, "wet" taro and "dry" Taro, the latter also known as Fiji Taro. The Fiji Taro is a much bigger plant and can be grown with less moisture. We were buying wet Taro and cooking it up as our main source of carbohydrates most nights. As a source of basic carbs I preferred it to potatoes. I also made dumplings one night (see picture) which were delicious. 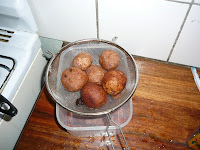 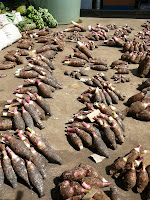 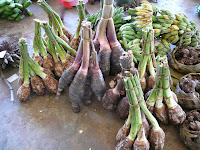 The difference between the two types of Taro confused me, so when I got back to Melbourne I looked into it. In brief, wet Taro is the ancient staple of Asia and the Pacific, Colocasia esculenta while dry Taro is Xanthosoma sagittifolium, equally ancient but from South America and so recently new to the Melanesia. The big question was and is, can they be grown in non-tropical Melbourne? Yes! That story next post.