The first harvest of sweet potatoes

I pulled up one plant today and here was the haul. Homegrown sweet potatoes, perhaps especially in clayey soils can look quite alien-like, or like organs of the body (as one friend put it today)...but still absolutely delicious! 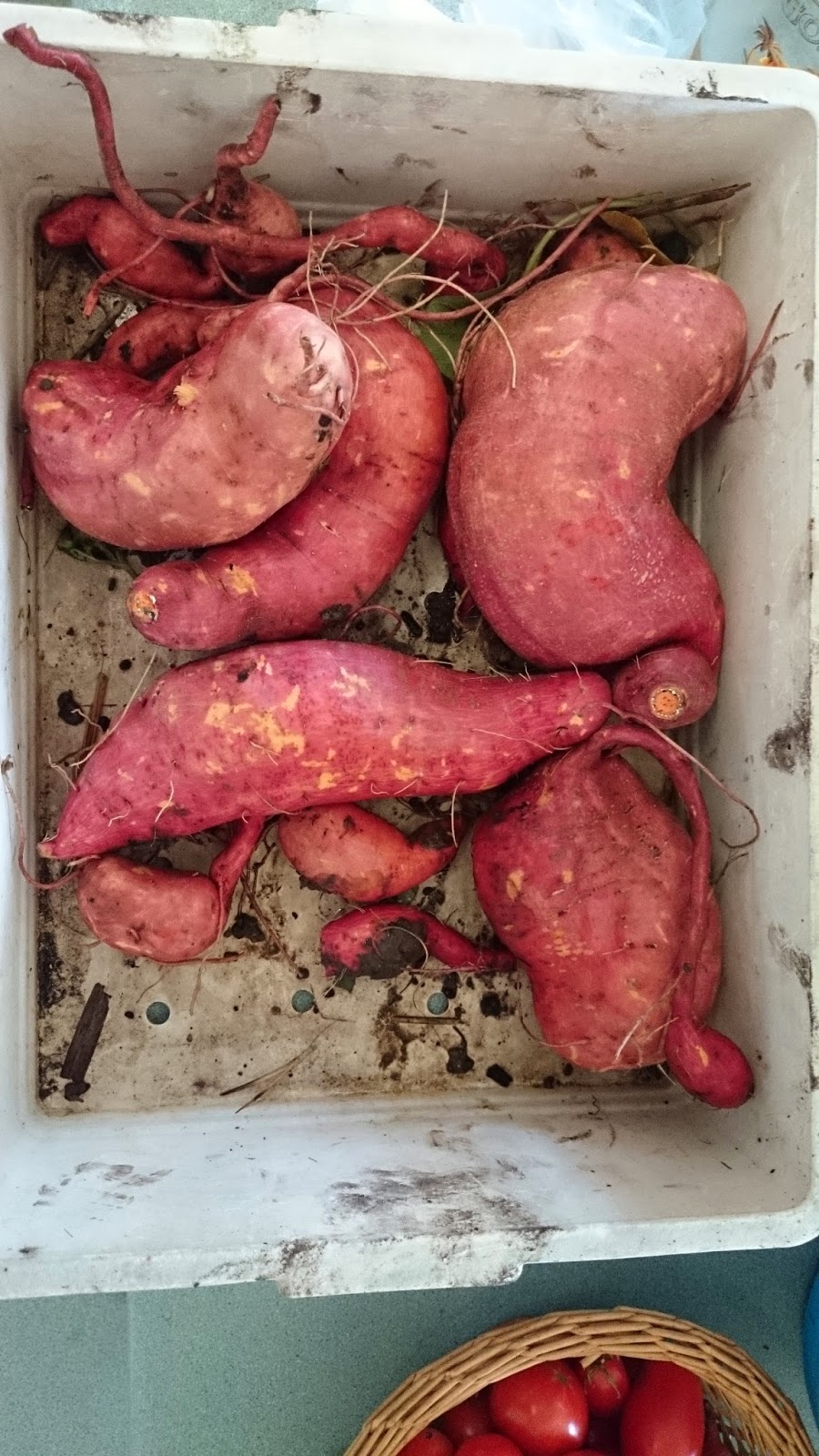 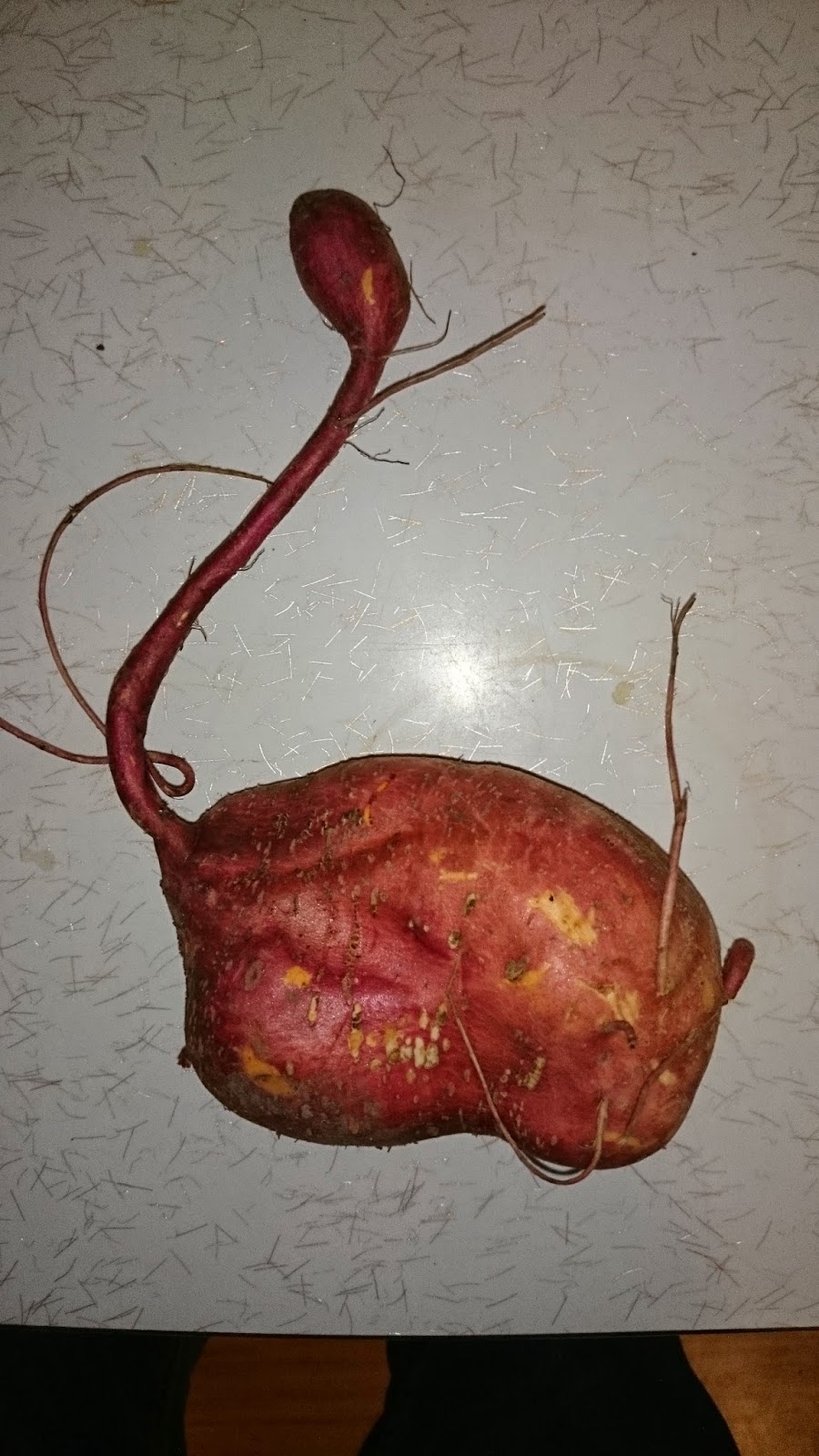 Posted by People Plants Landscapes at 5:13 AM No comments:

Choko or Chayote crop on its way

Finally I seem to be on the verge of having a successful crop of Chokos or Chayotes. A long, long time ago (in a garden far, far away etc)  I had a spiky version of Choko that was more cold tolerant than the ones sold commercially and it grew like crazy with hundreds of fruit. My Grandmother even stewed them with Granny Smith apples (as McDonalds was accused of doing with their Apple Pies here in Australia - some people believe this passionately but it's an urban myth). Anyway, I lost this vine and I haven't had much luck since then. I did grow a great vine several years ago which I've written a post about before but the fruiting wasn't very abundant. At any rate my friend Karen Sutherland of Edible Eden Design has a prolific Choko vine. She gave me some fruit last year and they sprouted during winter. I planted two along the fence here and as Choko vines seem to do, it grew slowly and steadily and then exploded once the really hot weather died down. More importantly it started flowering a good week or two before equinox and even more importantly there are lots (hundreds?) of tiny Chokos swelling along the vine (see photos below). I can't wait to eat the first one. More on Chokos down the track. 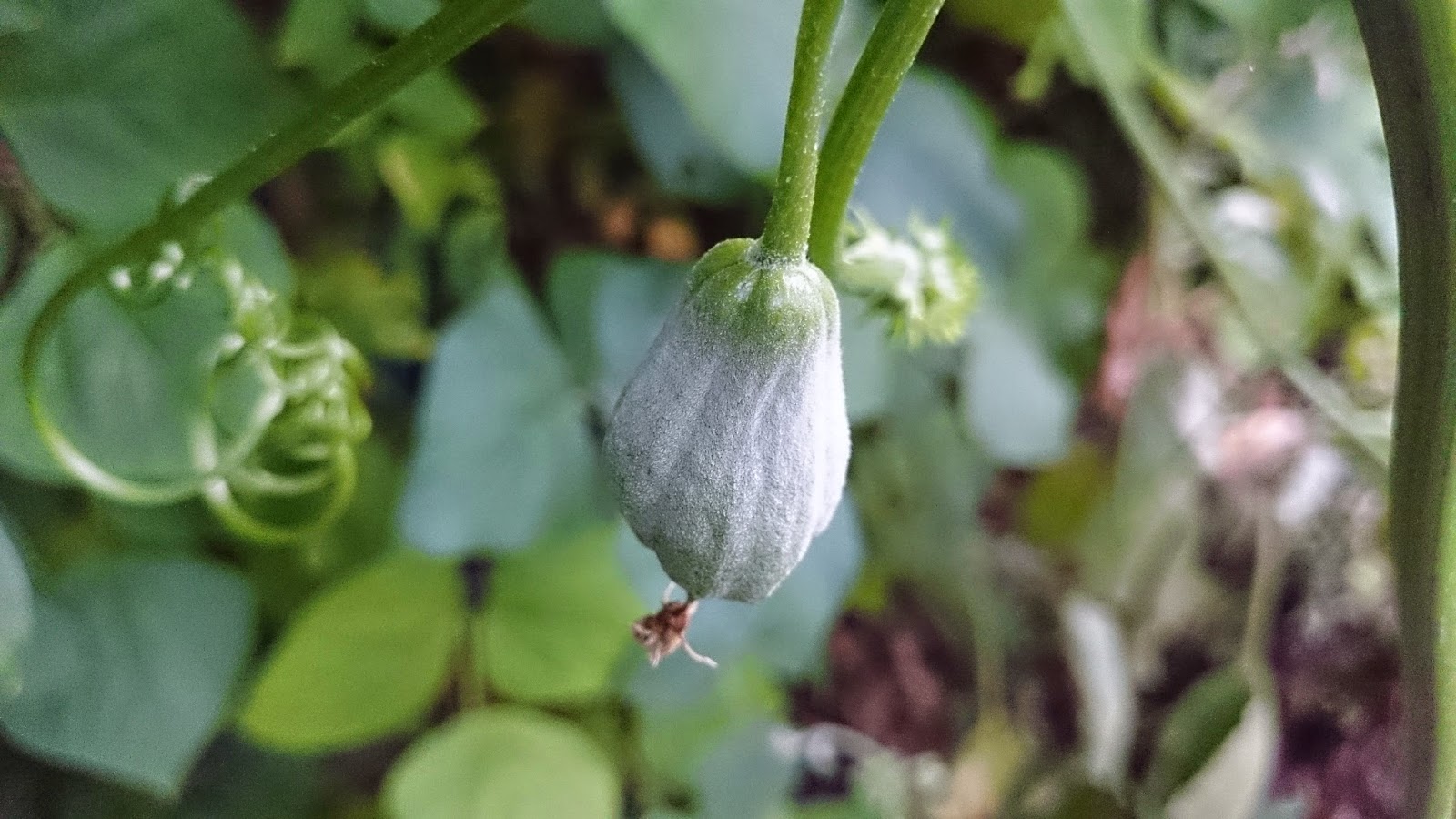 Posted by People Plants Landscapes at 1:25 PM No comments:

This weekend I'm going to pull up some Sweet Potato vines. I've been bandicooting the occasional sweet potatoes since mid-March because I just couldn't wait but now is the time to get a full harvest happening, at least of the earliest planted crops. I'm going to leave quite a few vines in until May or even June just to see the plants go in the colder weather and to see how much the tubers grow, if at all, going into colder days and nights. The photos below show how the Sweet Potato plants have grown over the course of summer and autumn, from early December until now.

We've had proper rain here for the last few days, the first consistent downfalls for four months. It's been less "rain" than constant drizzle, bringing over 30mm over three or four days which sounds pathetic if you come from anywhere really wet, or even from what seems like a long-lost Melbourne but it's been great. It's also been mild still as well, like being in a cool tropical high altitude world stuck at around 18 or 19 degrees all day, like Bogota (as I imagine it!). 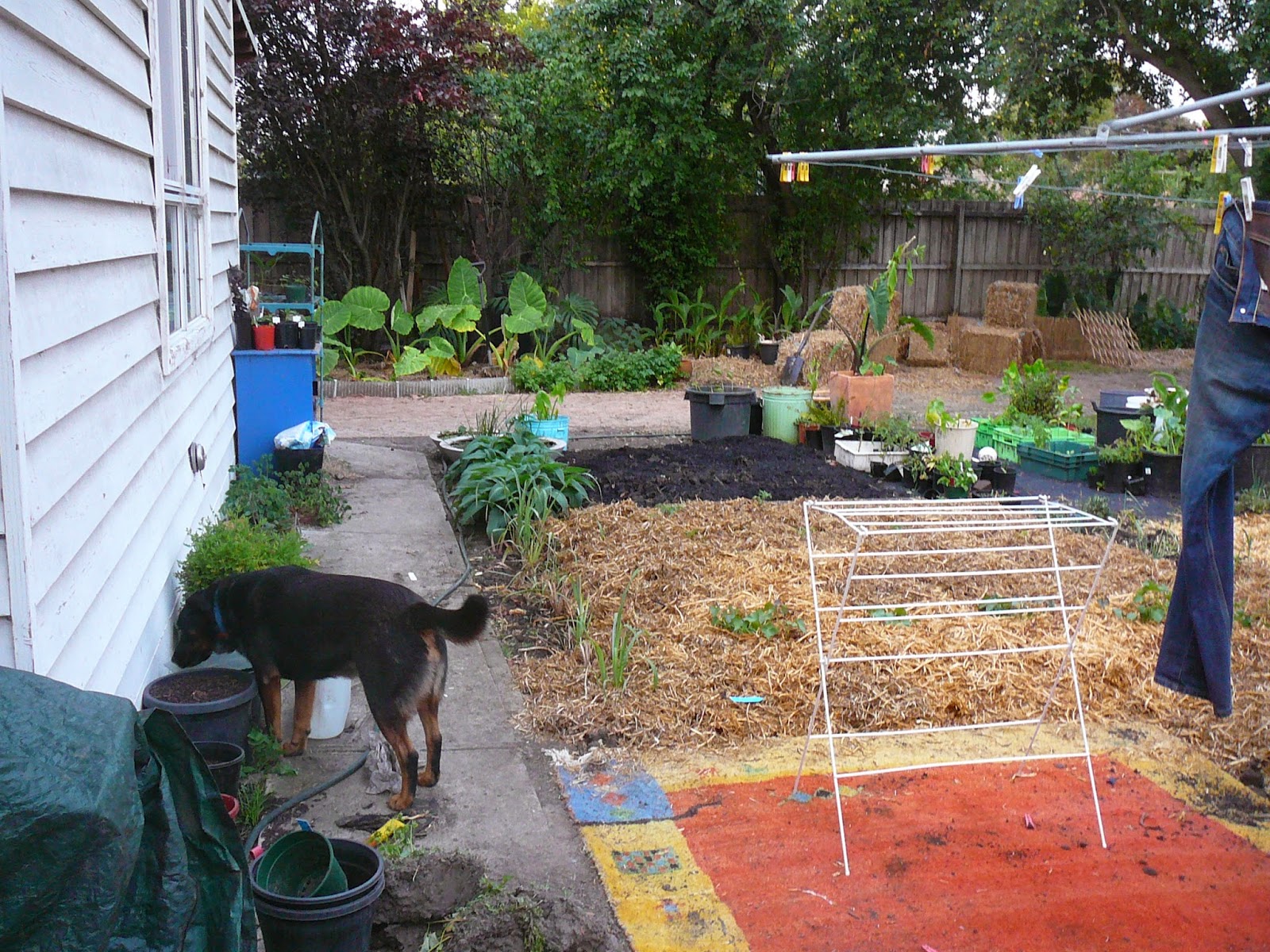 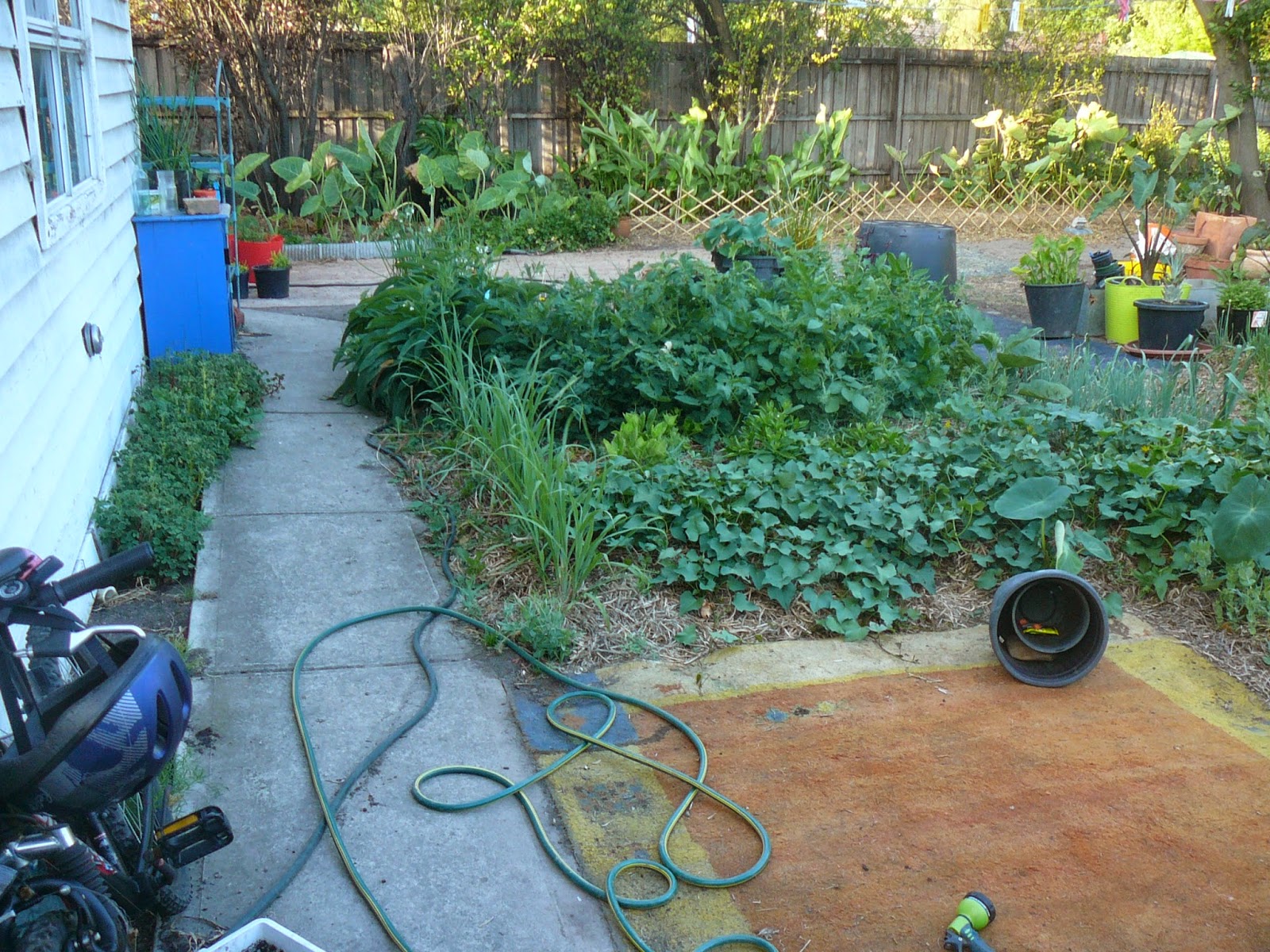 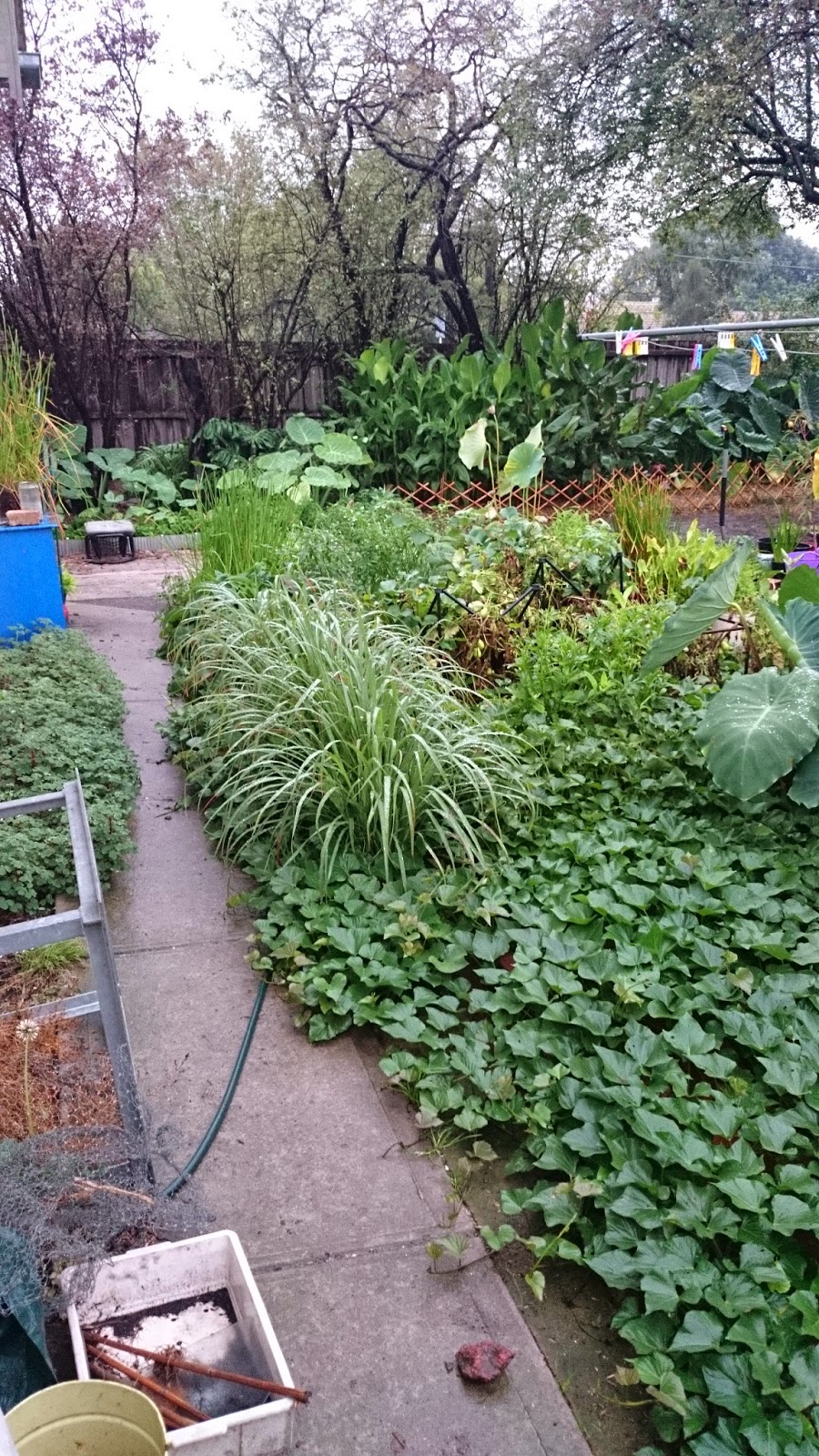 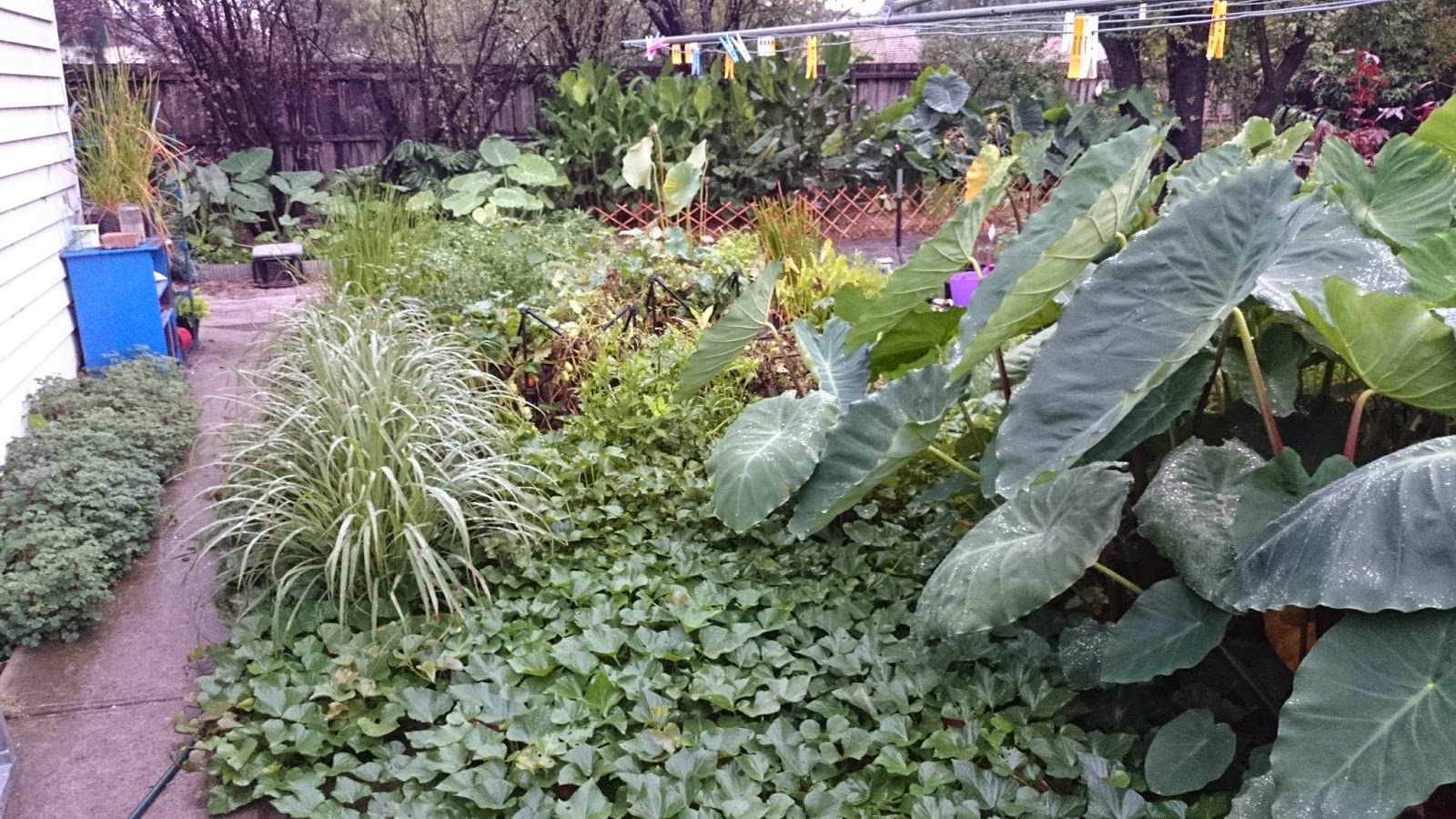 Over the last few months some colleagues and I have developed an edible landscape demonstration garden in the historic Burnley Field Station. It's an attempt at creating what I call a 'seamless landscape' with food plants - essentially a garden that doesn't look like a functional 'veggie patch' in the conventional western sense. My aim was to show that you could create an aesthetically pleasing edible landscape on basic drip irrigation that could suggest ideas for private gardens as well as for better quality (= well loved and maintained) public spaces. We've used all perennial species in a fairly simple layout. All the plants are tropical except for a border of comfrey and a teepee of American Ground Nut. 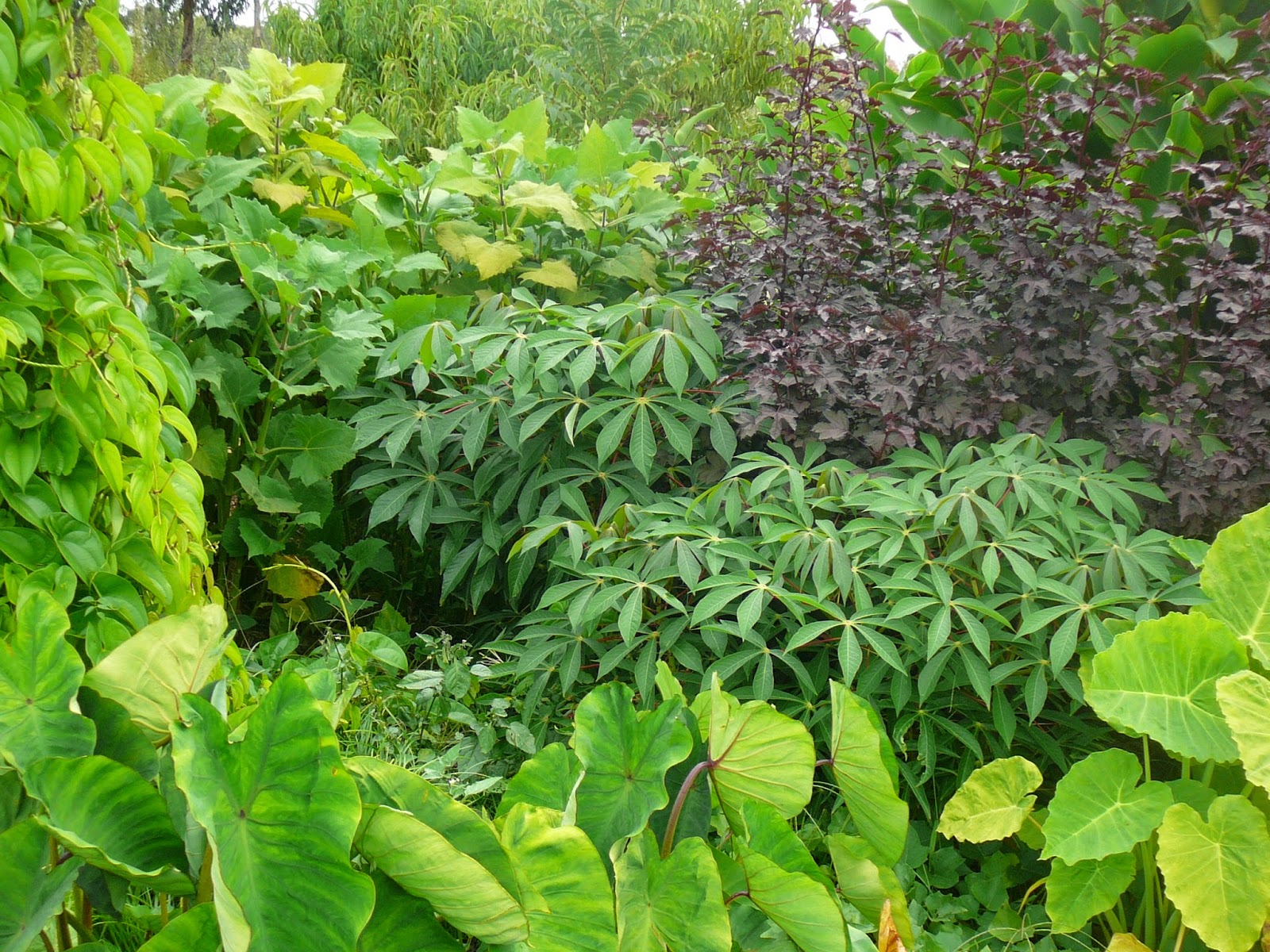 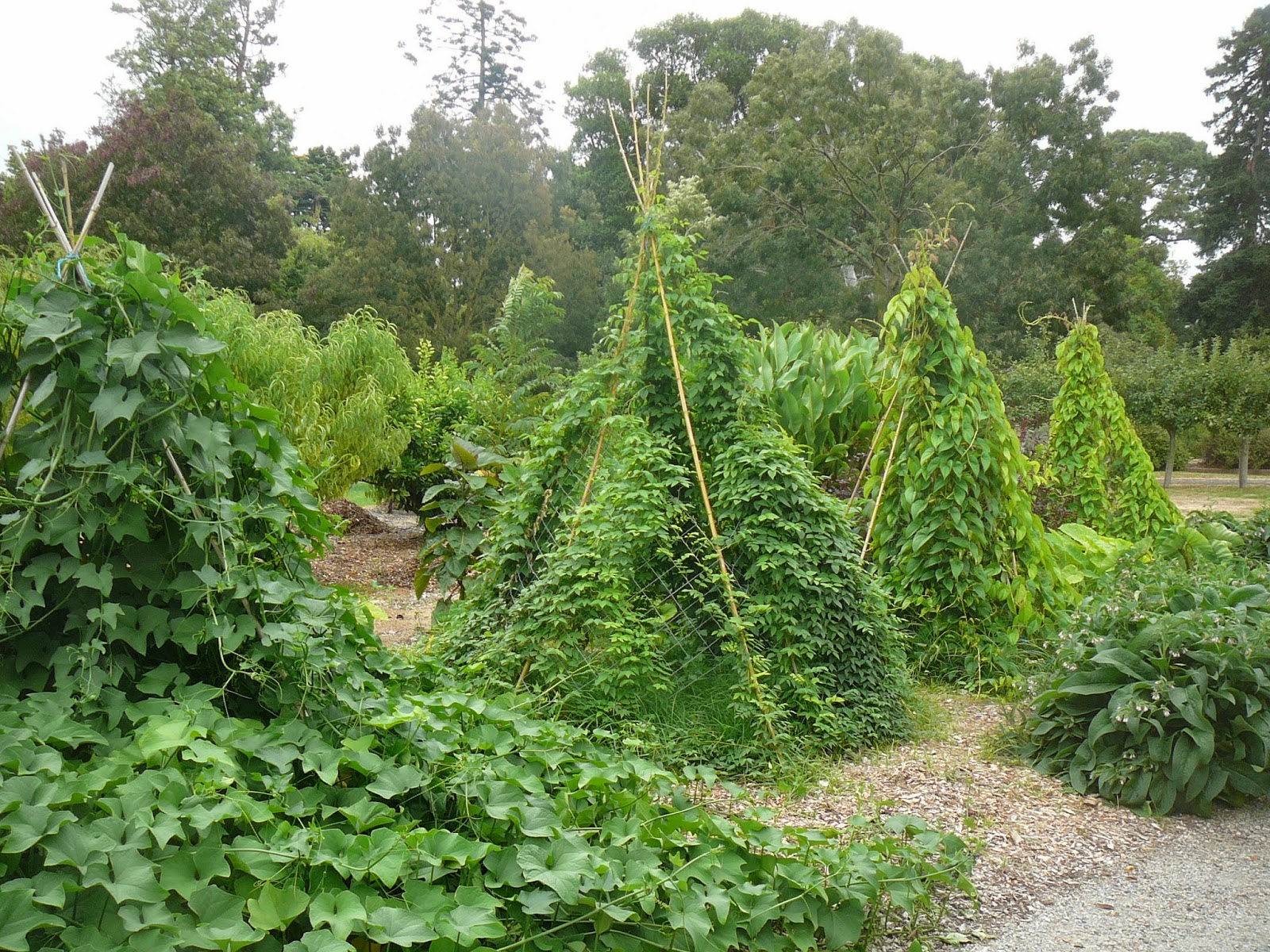 The plantings of Dioscorea alata are also part of a propagation and culture trial. Because Yams are rarely grown in Melbourne and at this latitude, and are therefore rare or non-existent in Melbourne nurseries I'm trying to work out how best to propagate them. This is so that we can demonstrate to the nursery industry (both wholesale and retail) the best ways to grow this species and in a relatively straightforward manner. My colleague Dr Andrea Kodym came to the rescue and convinced me to try conventional asexual propagation methods, as opposed to tissue culture which I had imagined from the literature would be the best way. I'll discuss what we did in some detail in another post but in the meantime we produced lots of specimens last spring 2013 from divided tubers and subsequent re-division (and then from cuttings) and planted out over thirty individual plants in December last year (the start of our summer) around two teepees.  So along with two types of Taro, Choko, Sweet Potato, Canna, American Ground Nut, Cassava, Lemon Grass, Cranberry Hibiscus, Yacon, Pepino and Comfrey, the Yams add to a kind of tropical dreamscape, more reminiscent of a Melanesian food garden than a ''veggie patch". The whole things will die off in winter and turn
to sludge (by and large) so a big harvest will be a schedule maintenance activity. Here are some more photos. 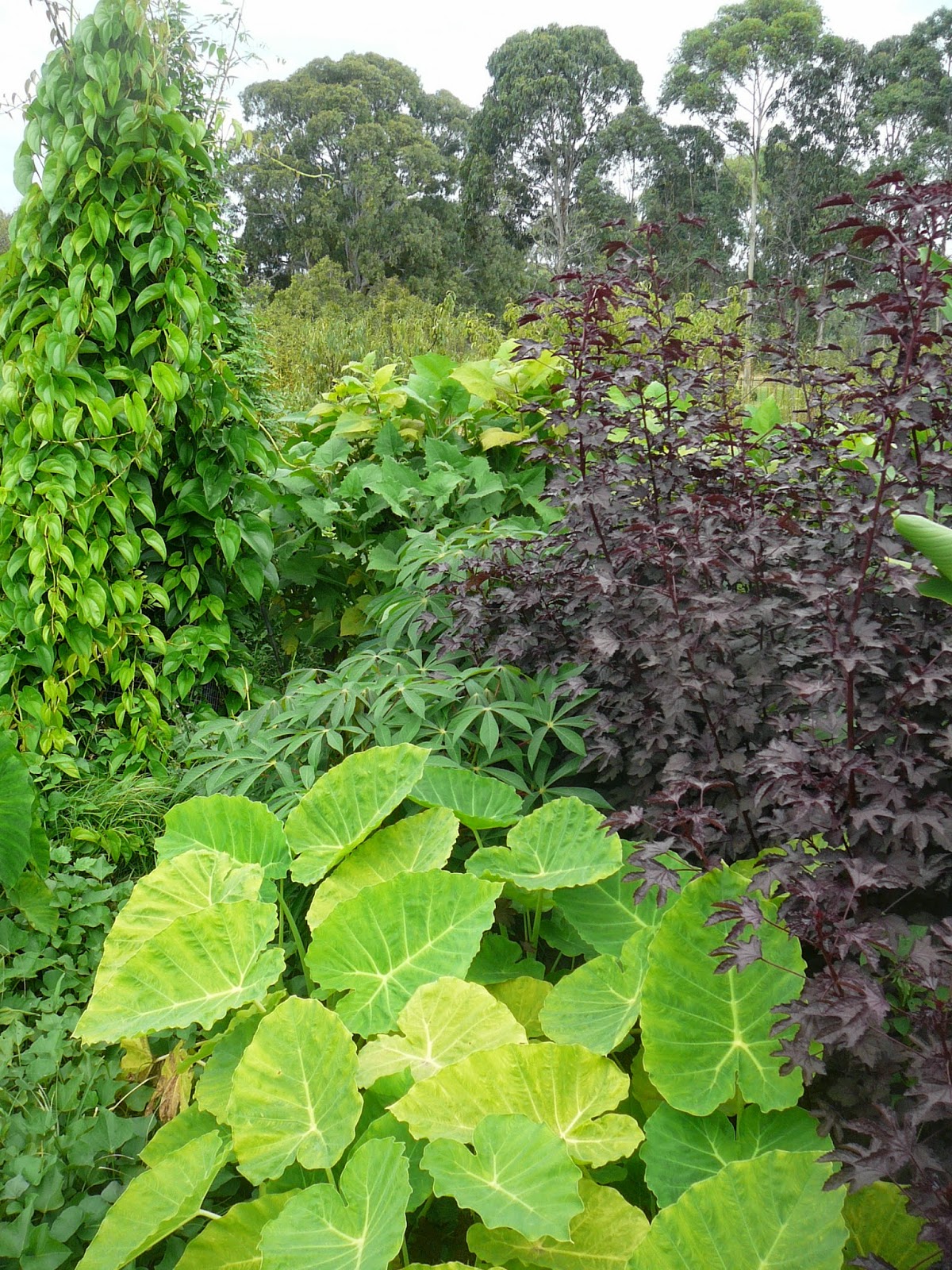 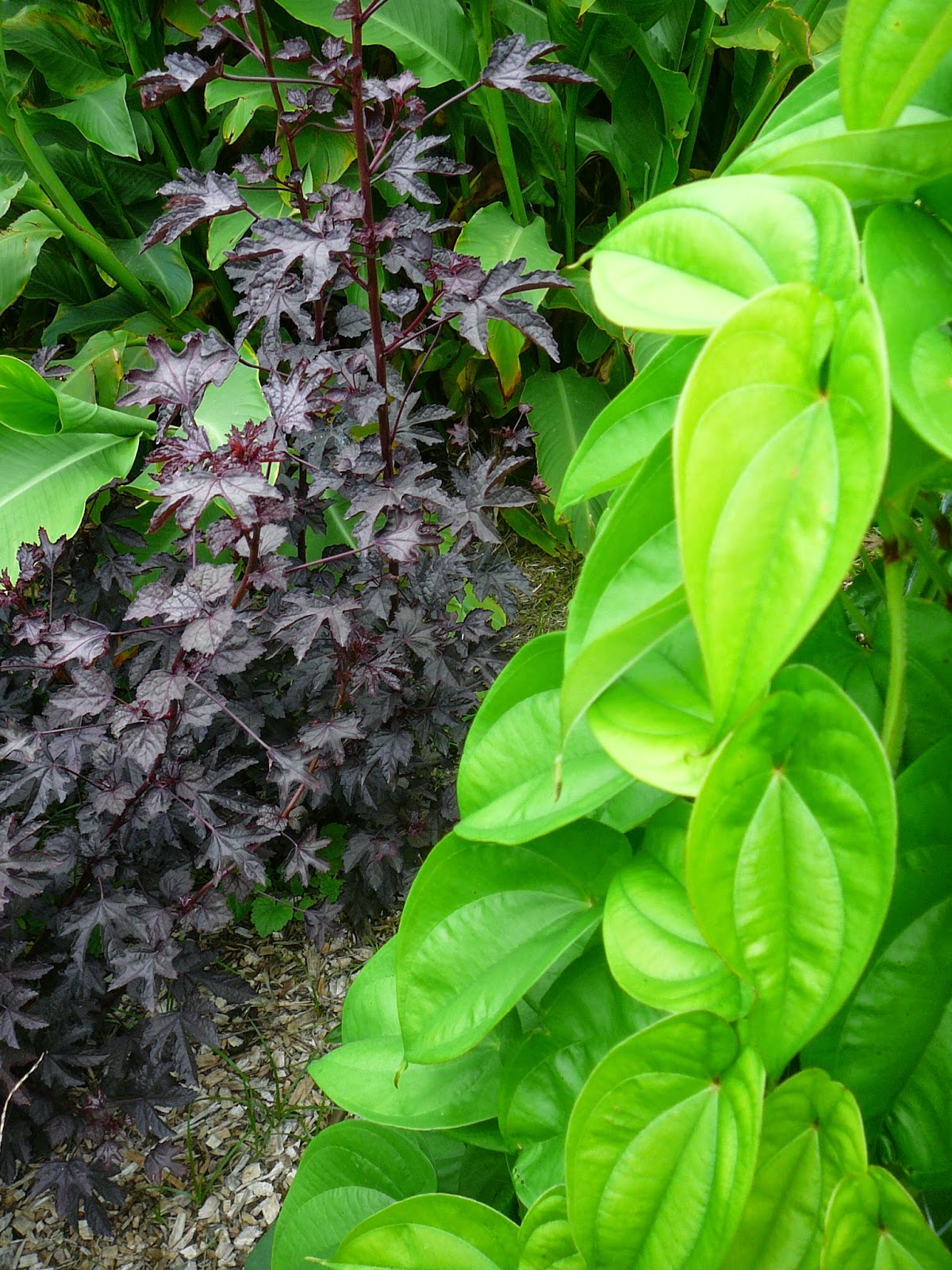 Posted by People Plants Landscapes at 2:14 PM No comments: