Harvesting Taro - 'cheeky' or not?

I grow around four varieties of Taro Colocasia esculenta, maybe five if you include Tahitian Spinach. I've discovered these types by accident in that their origin is from tubers bought at the market and then grown on. Once plants are established the variation in leaf shape, colour and overall size of the plant becomes obvious. When I first grew Taro in Melbourne I wasn't confident that the plants would be very productive because of their tropical origin but in fact the tubers, strictly speaking corms, form relatively quickly. Now this does depend on the variety and just how big you expect your tubers to be!

For example, people from Polynesia (it seems) like the really big tubers whereas other cultures prefer the smaller types. One of my students is Samoan and she tells me that her family are "Taro snobs" and really don't like the small Taro tubers available in many markets. And these small tubers are not immature or undersize tubers (as I first thought) but simply different types.

So what does all this mean for productive Taro growing in a temperate zone backyard food garden? In short, the smaller Taro tubers will grow well in one Melbourne growing season (perhaps, we should admit in a climate change induced warmer Melbourne!), while the larger varieties may take a couple of seasons. But what of differences in taste and texture between these Taro types? And what about any variation in their degrees of ''cheekiness'', that is the levels of calcium oxalate crystals which sting your mouth and throat if not cooked properly?

I find that the smaller types are very uncheeky, needing only around 10-15 mins of active boiling to be completely sting free. (Please don't let this stinginess discussion put you off - Taro is delicious!) The bigger ones seem to be a different story. A few weeks ago I prepared one of the tubers from a larger type and to be honest the tuber was a cheeky nightmare. I couldn't get rid of the stinging sensation. I did everything short of nuking this thing but after two lots of hard boiling and baking it was still horrible. I've now written this type off except as an ornamental plant because it is very beautiful.

Last weekend I moved onto my favourite Taro variety. This is one that came from an organic farm in NSW owned and managed by a friend's partner. It has enormous leaves which I have posted on before but I have never tried the tubers. The plant I dug up has had two years in the ground and has been growing steadily under a small self-sown plum tree in clayey soil. The photos below show the whole process of digging up, separating the tubers, cleaning them up as well as some cooked pieces of Taro. The pics also show some market bought Taro for comparison. So what was the cheekiness verdict? On a 15 minute boiling the Taro was yummy but there was a slight stinging sensation left on the lips and front of the mouth (not the throat as I had found in Vanuatu). It wasn't too bad but enough to be frustrating, especially if you imagined trying to convert friends and family to a new form of carbs! So I tried soaking cut pieces overnight, boiling for 10 minutes, changing the water and boiling for another 10-15 minutes. Problem solved.

As for productivity, I didn't weigh the harvest but I was pleased with the amount of tubers, especially from a no-fuss plant that I had left to grow in an obscure part of the garden where 'normal' veggies would struggle. 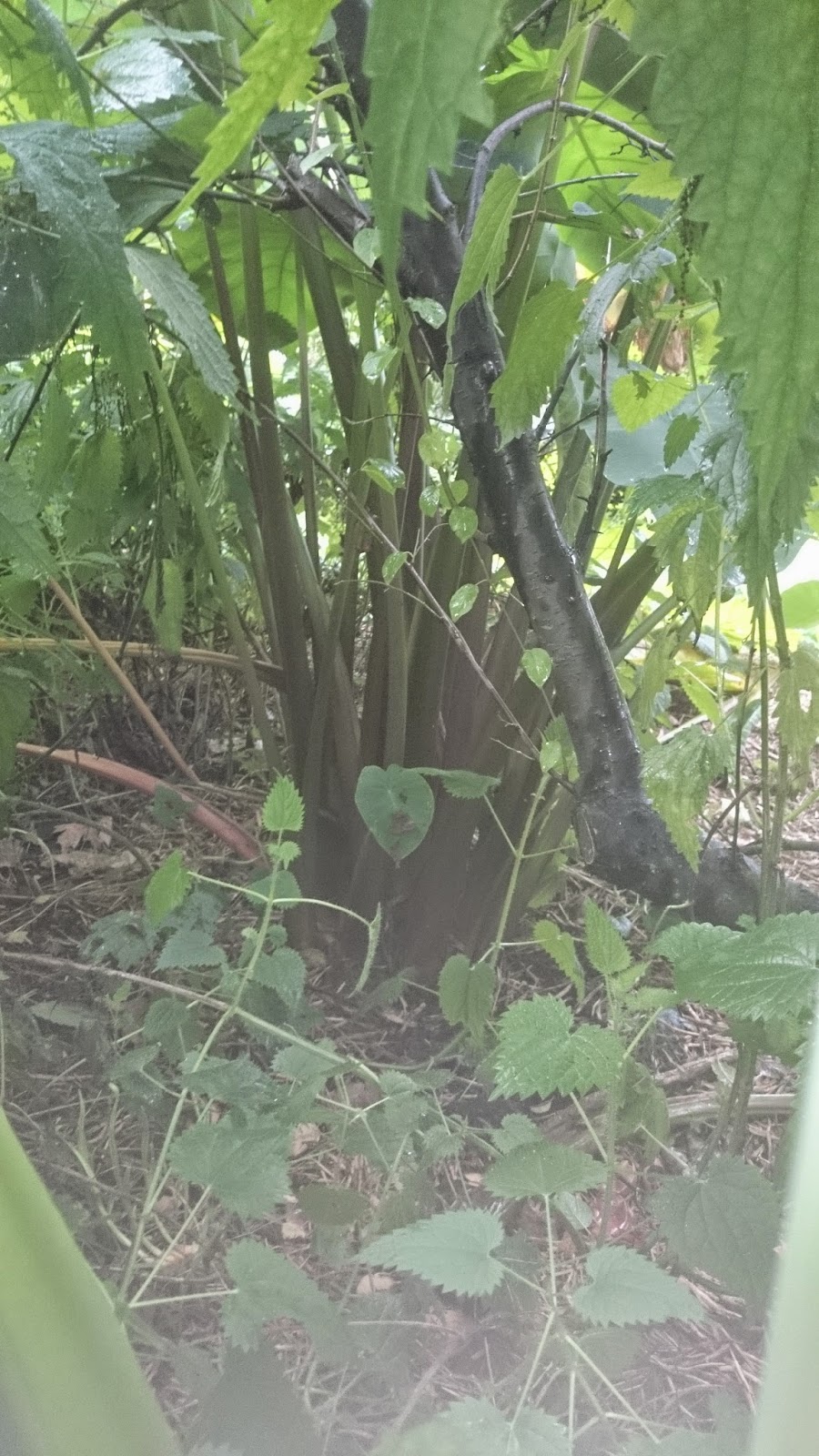 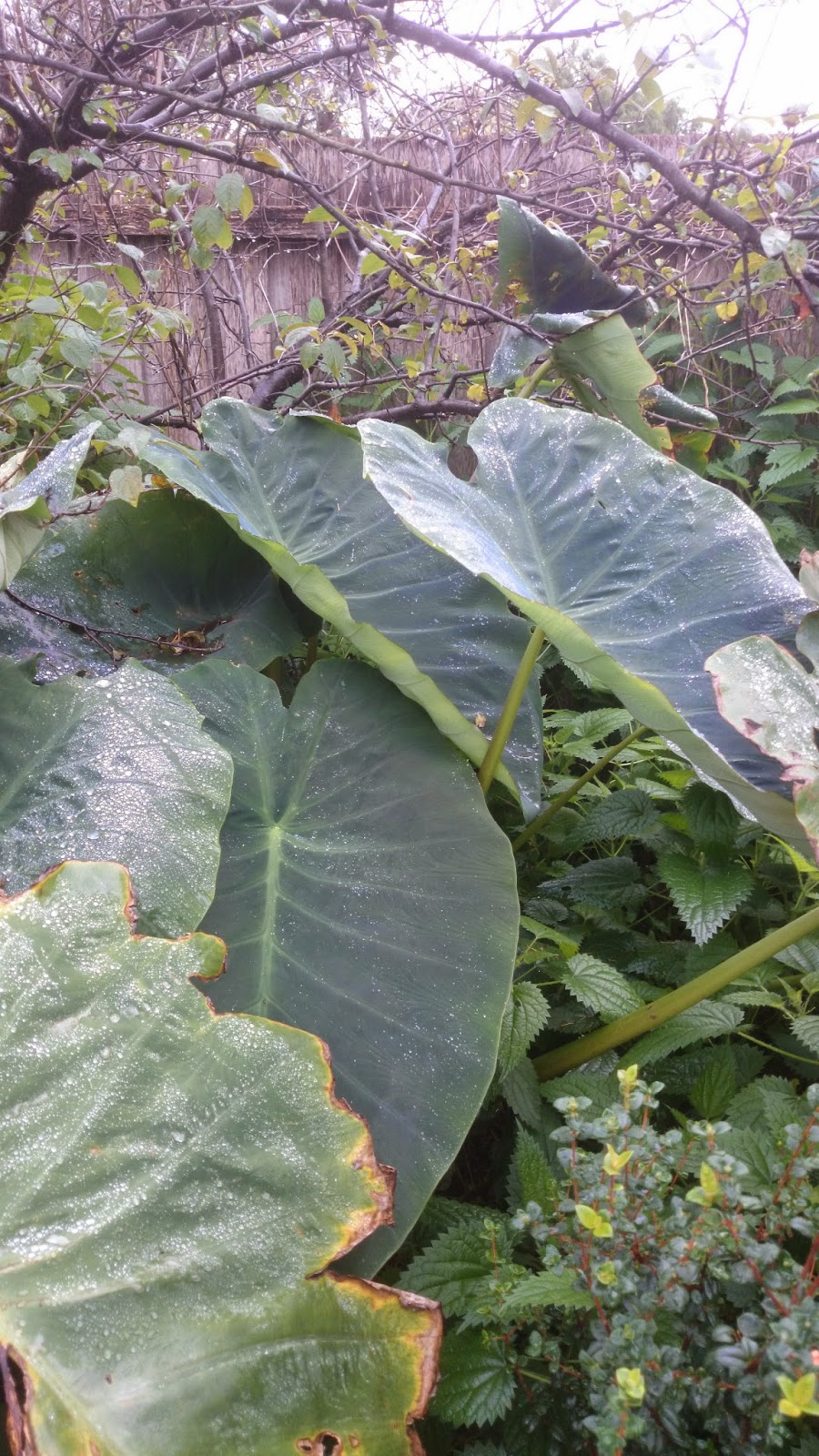 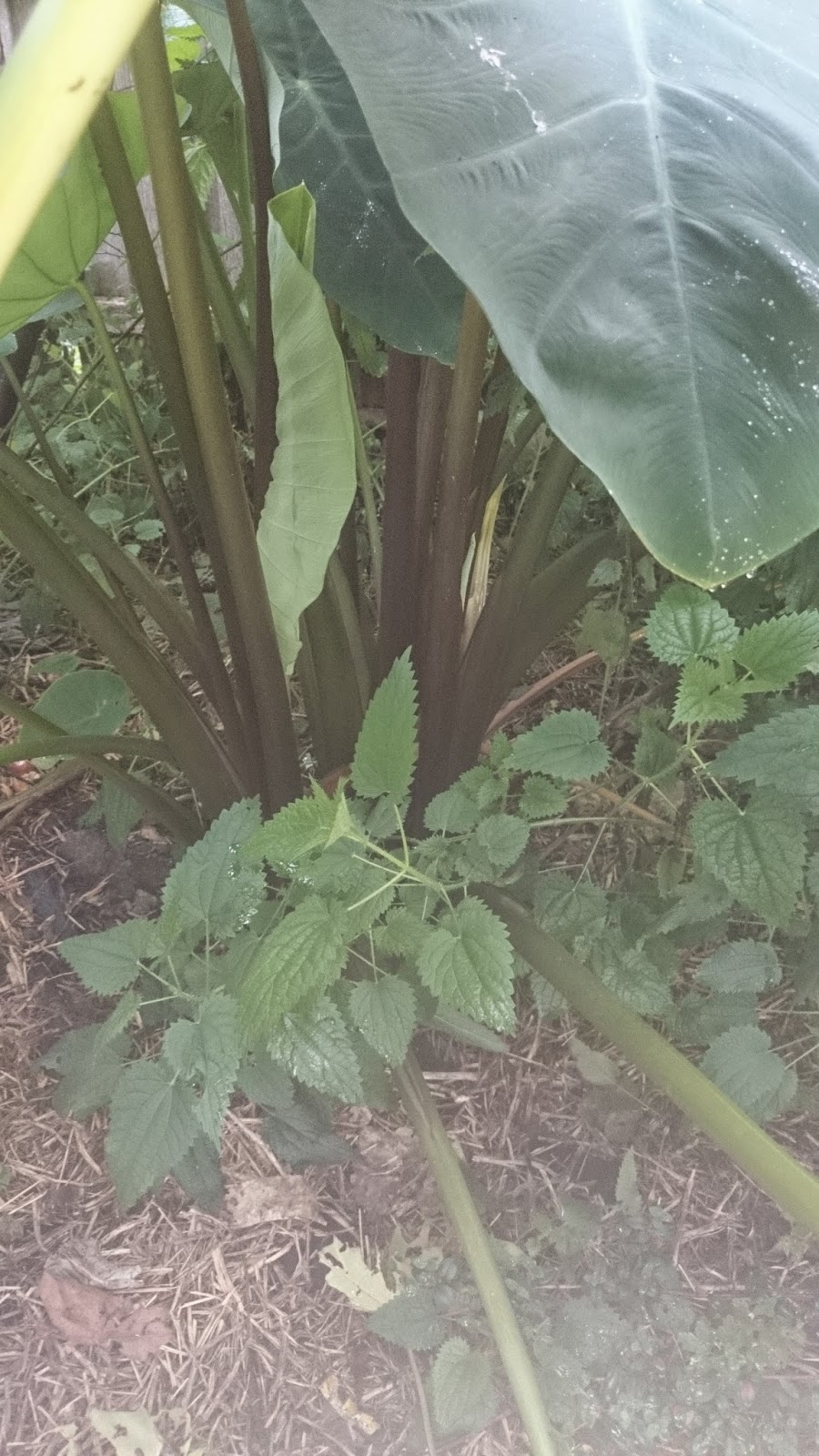 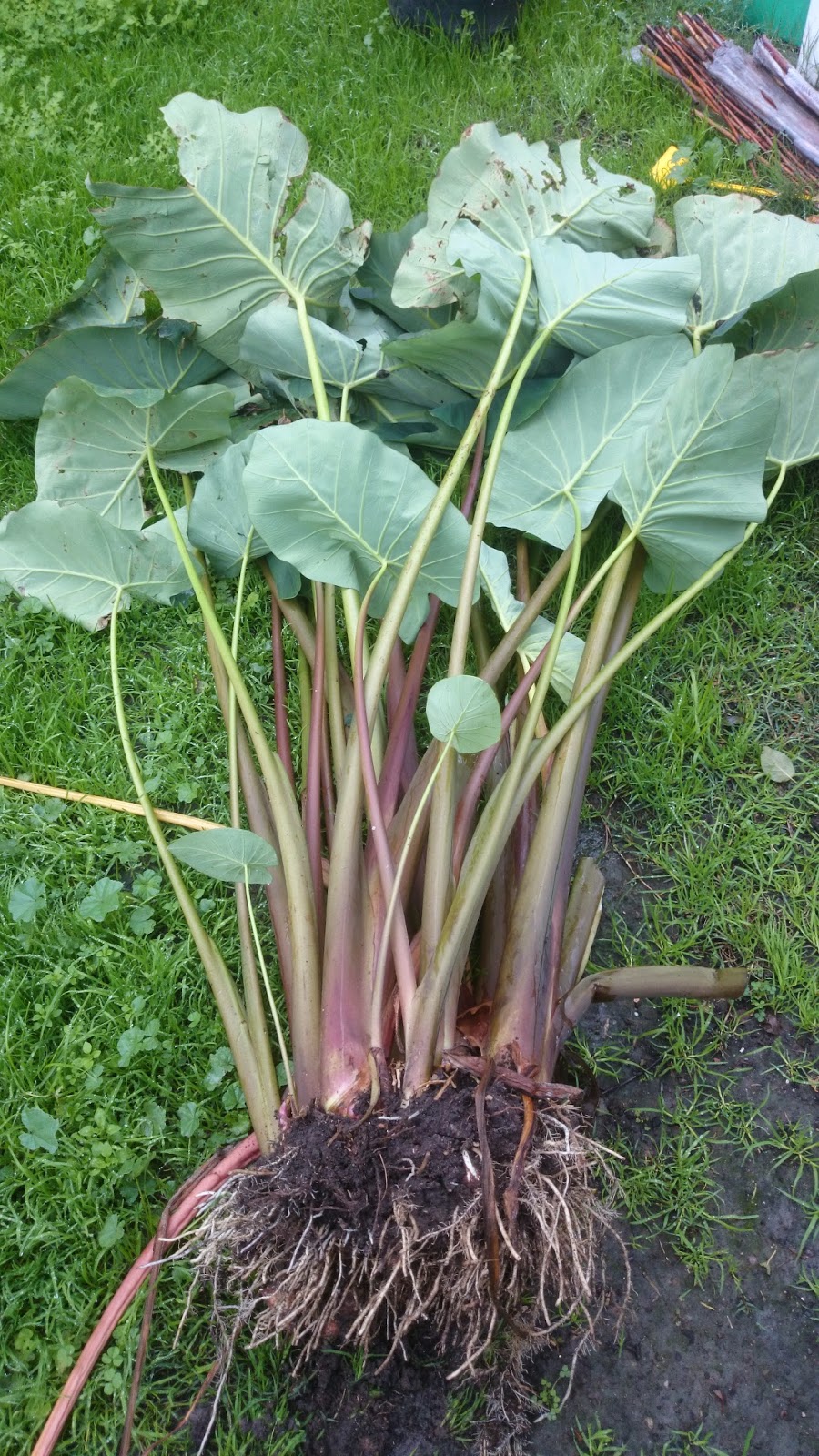 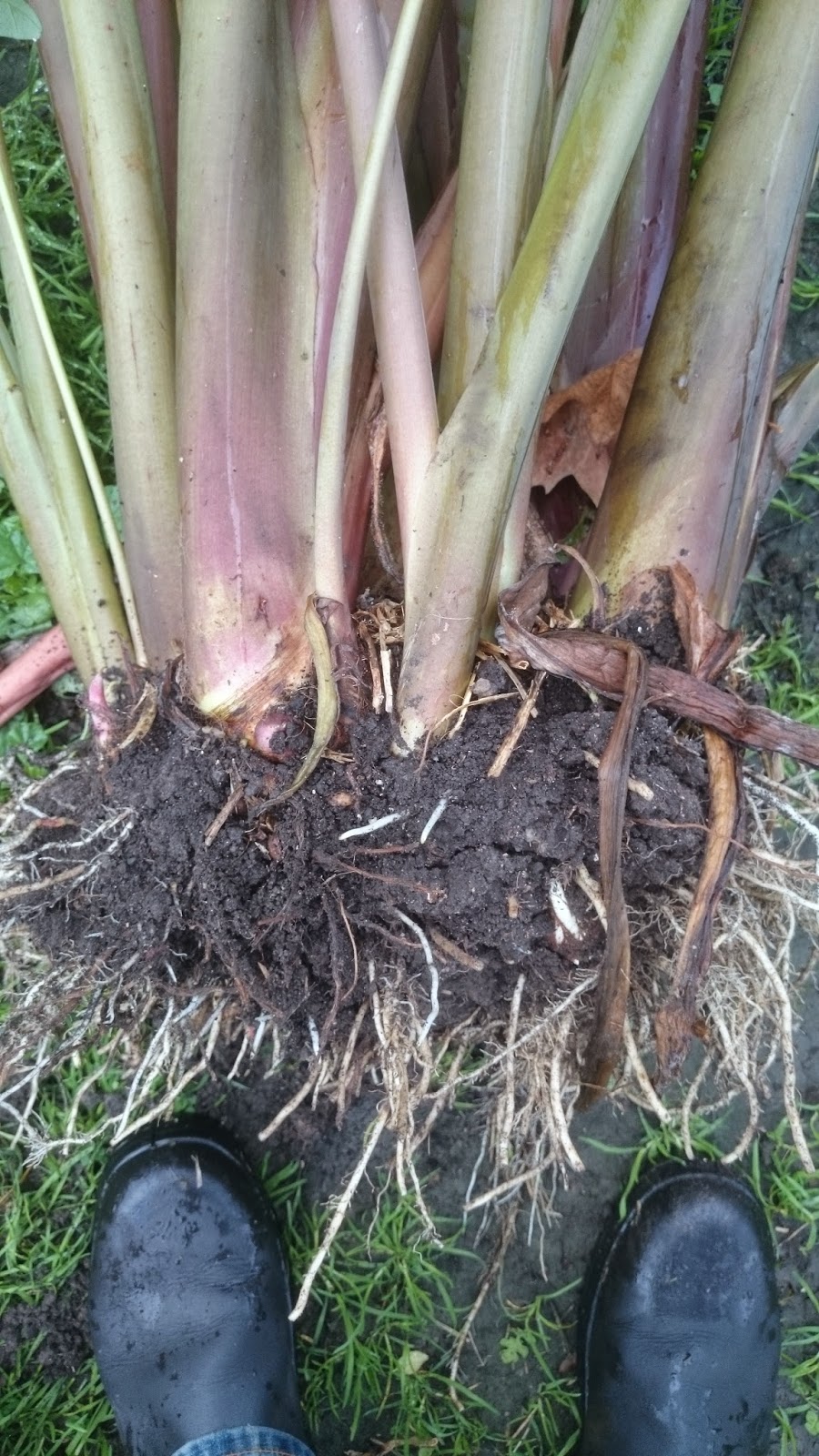 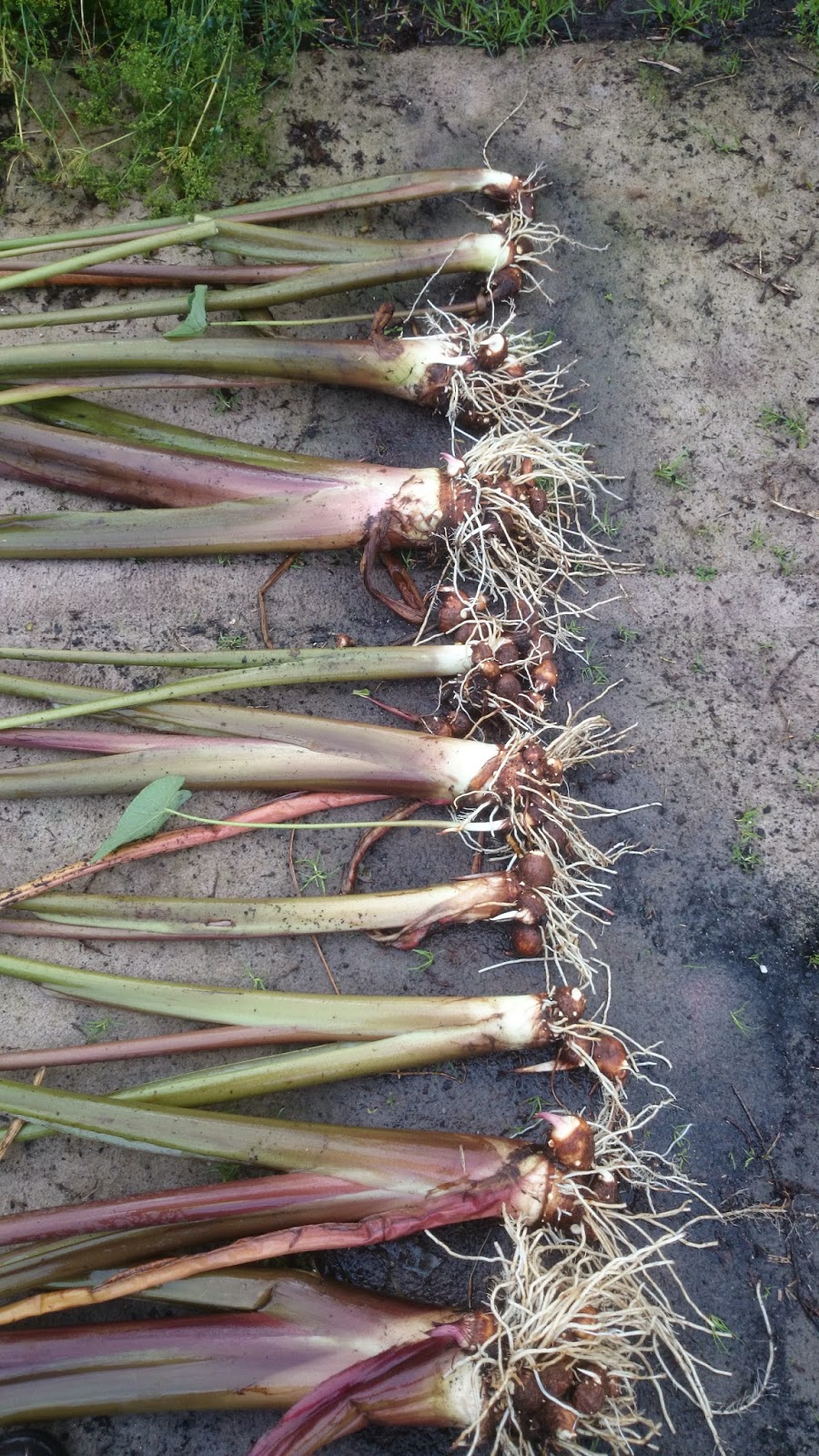