Some plants are edible, perennial and beautiful and I get very excited about their prospects but then they turn out to be duds in some way. Mexican Tree Dahlia is one of these plants. As an ornamental it remains one of my favourites. I love the bamboo-like canes emerging in spring, pushing skywards all summer until sprays of pink star flowers float in the air on grey autumn days. But as for edible tubers, forget it!!! I dug some up, of varying sizes (mostly enormous) and tried to bake them. The resin smell was off putting and they were as hard as a rock. It would have been easier cooking a pine log. It's hard to believe that anyone who has ever promoted this species as an edible has actually tried them. I suspect that people have taken a guess that they're OK to eat because smaller dahlia tubers can be cooked up and eaten. A comment from David on my last post on this species said that he had never eaten a Dahlia tuber of any type worth eating and I think he's probably right. 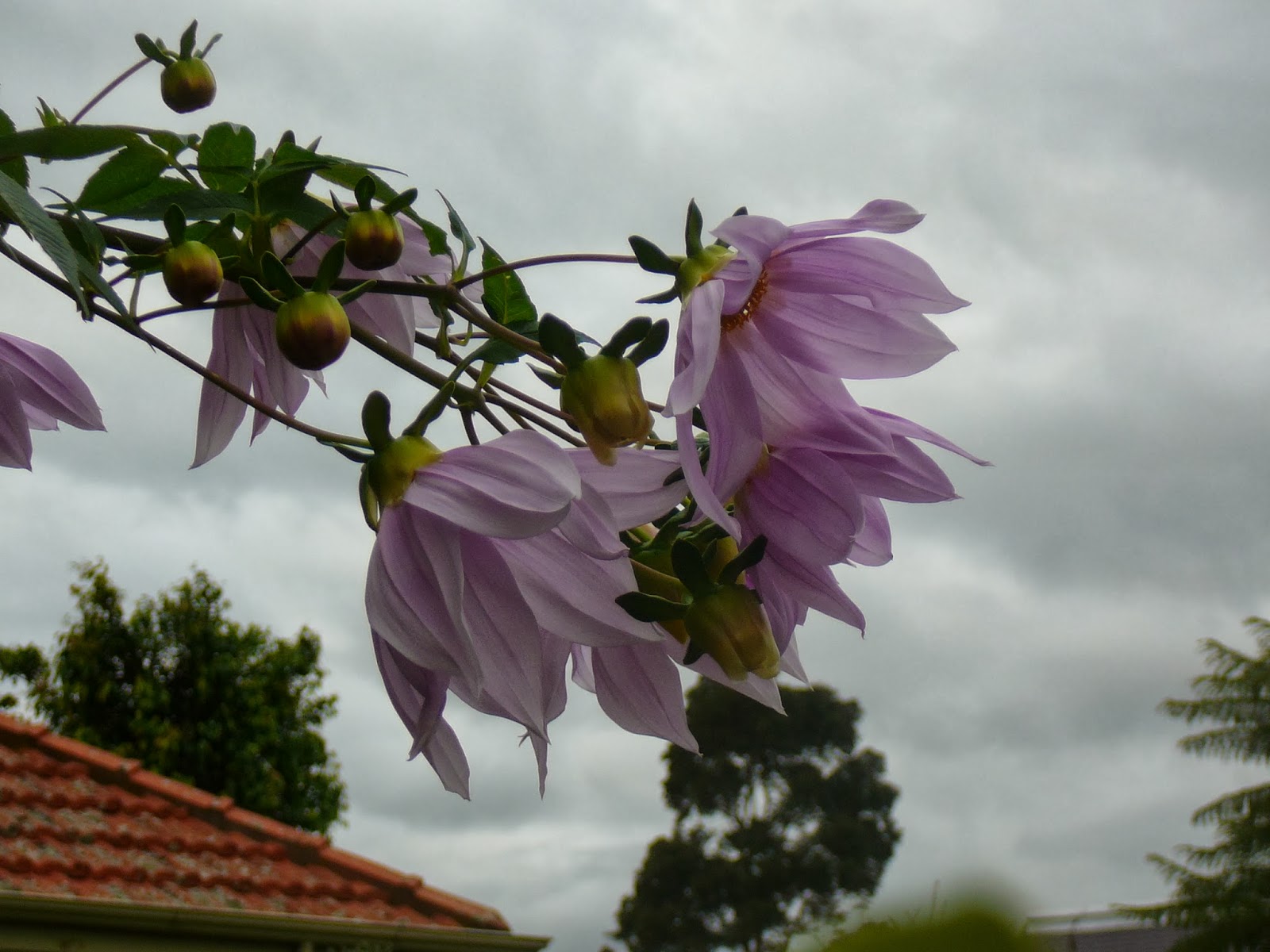 Intrigued about this supposed edible quality of Tree Dahlias I did an extensive search through Google Scholar of accounts of their use as food in the species' original habitat. Finally I found a paper (sorry, don't have it handy now) which had Tree Dahlia in a table of foods eaten by the descendants of the Mayan people. However, the edible portion used was the leaves not the tubers and these were boiled then fried. So out I went into the garden to pick some Tree Dahlia leaves. These I simply boiled and ate (no frying) and they were passable at best.

So I officially recant my first post on Tree Dahlias except for one thing, they're beautiful to look at. So in short: do not bother with the tubers, if you are desperate you can cook the leaves but if you want the a plant with seasonal drama and autumn display then plant away....(final caveat: it's hard work removing them once they are established.)


Posted by People Plants Landscapes at 12:46 PM No comments:

In my previous post I talked about removing plants of Celery Stem Taro/Tahitian Spinach and essentially turfing them out in favour of Coco Yam. Well this wasn't quite the whole story as although Tahitian Spinach is grown primarily for its leaves and stems, I noticed that the tubers on the oldest specimens I dug up were quite large. So I cut them off and prepared them for cooking and once boiled up they were yummy. As might be predicted there was no hint of "cheekiness" in any piece of the cut tubers (given the low calcium oxalate content of this variety)...so photos below show the whole process. Perhaps Celery Stem Taro is not as useless as I thought... 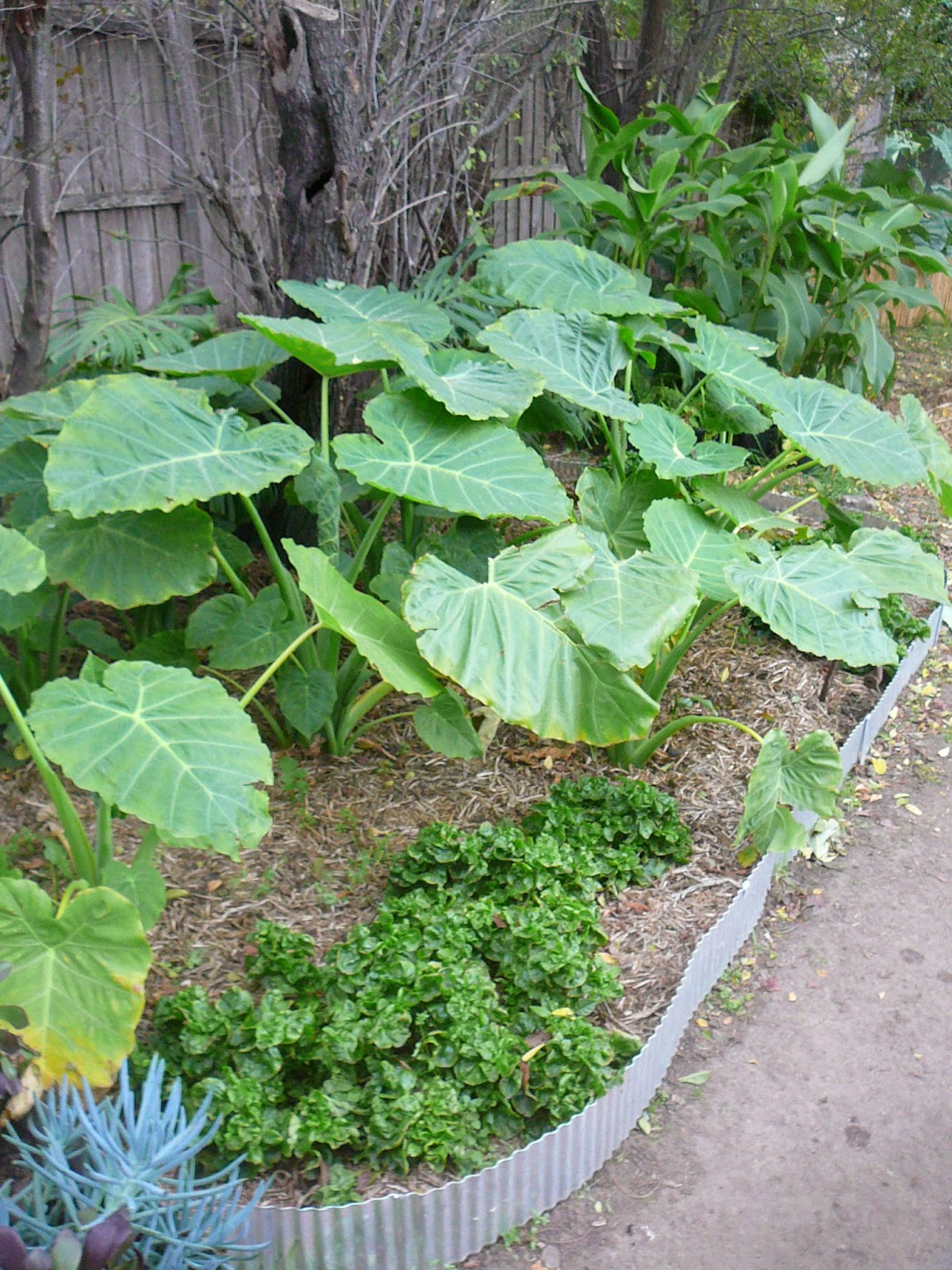 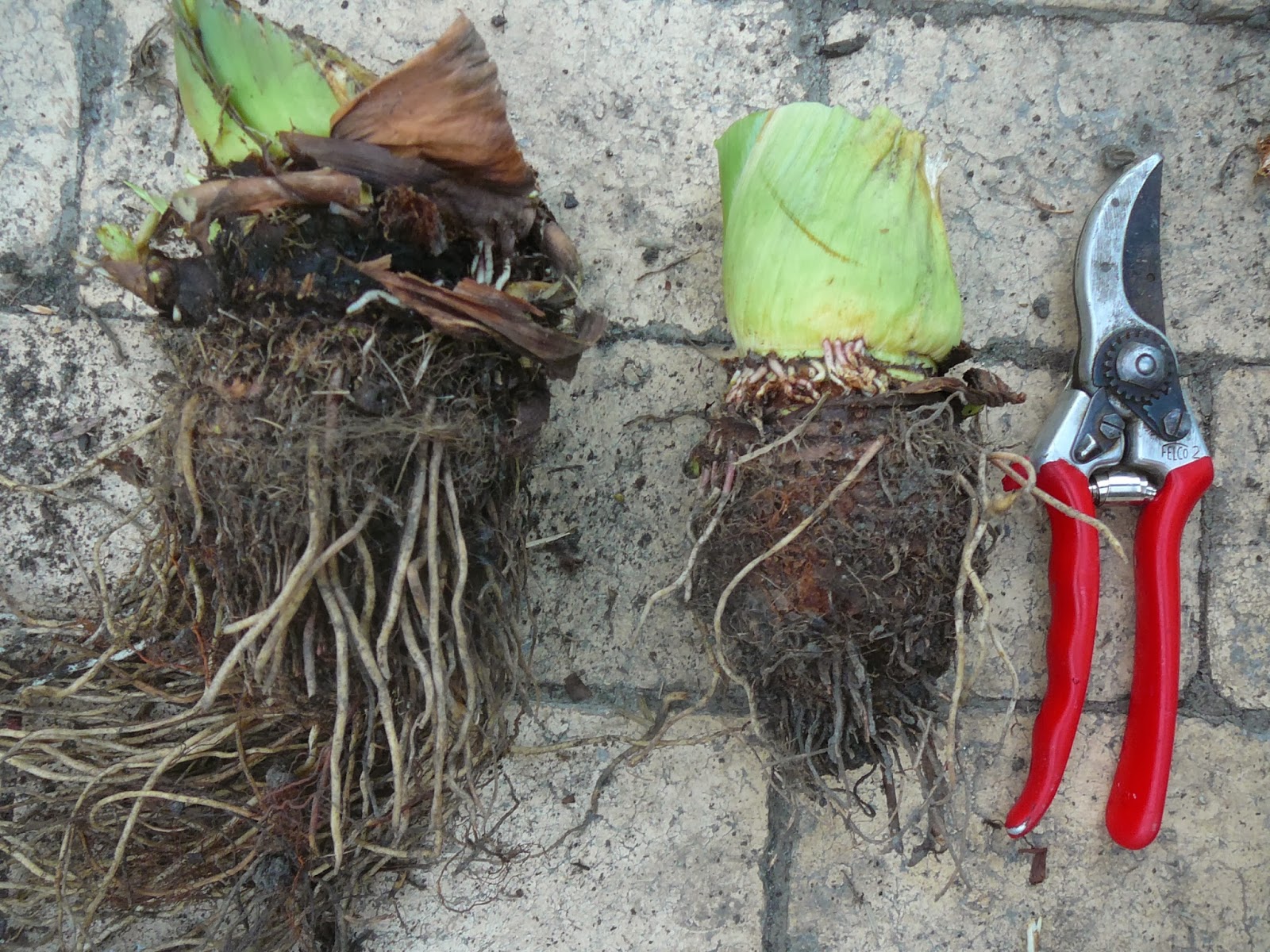 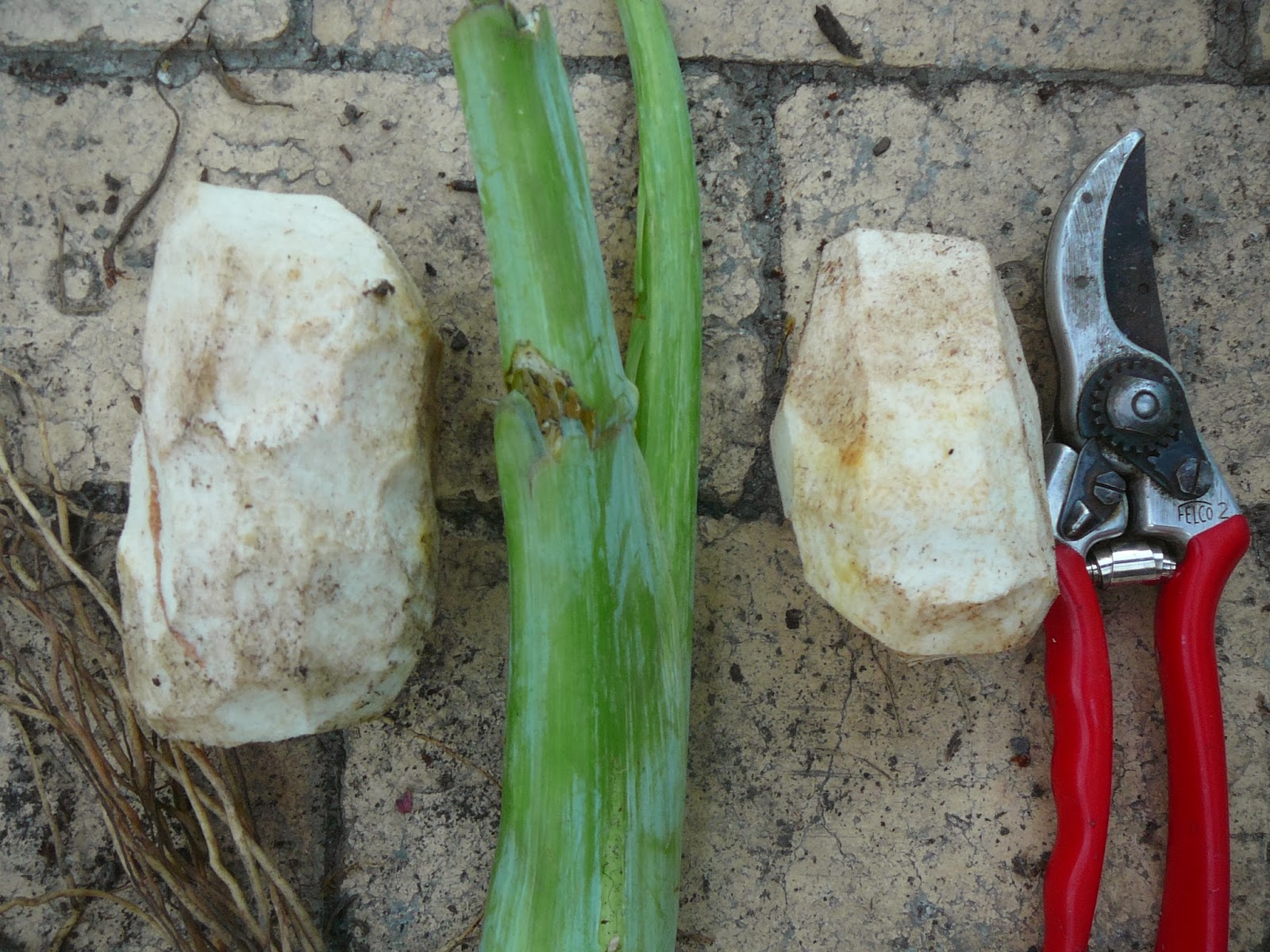 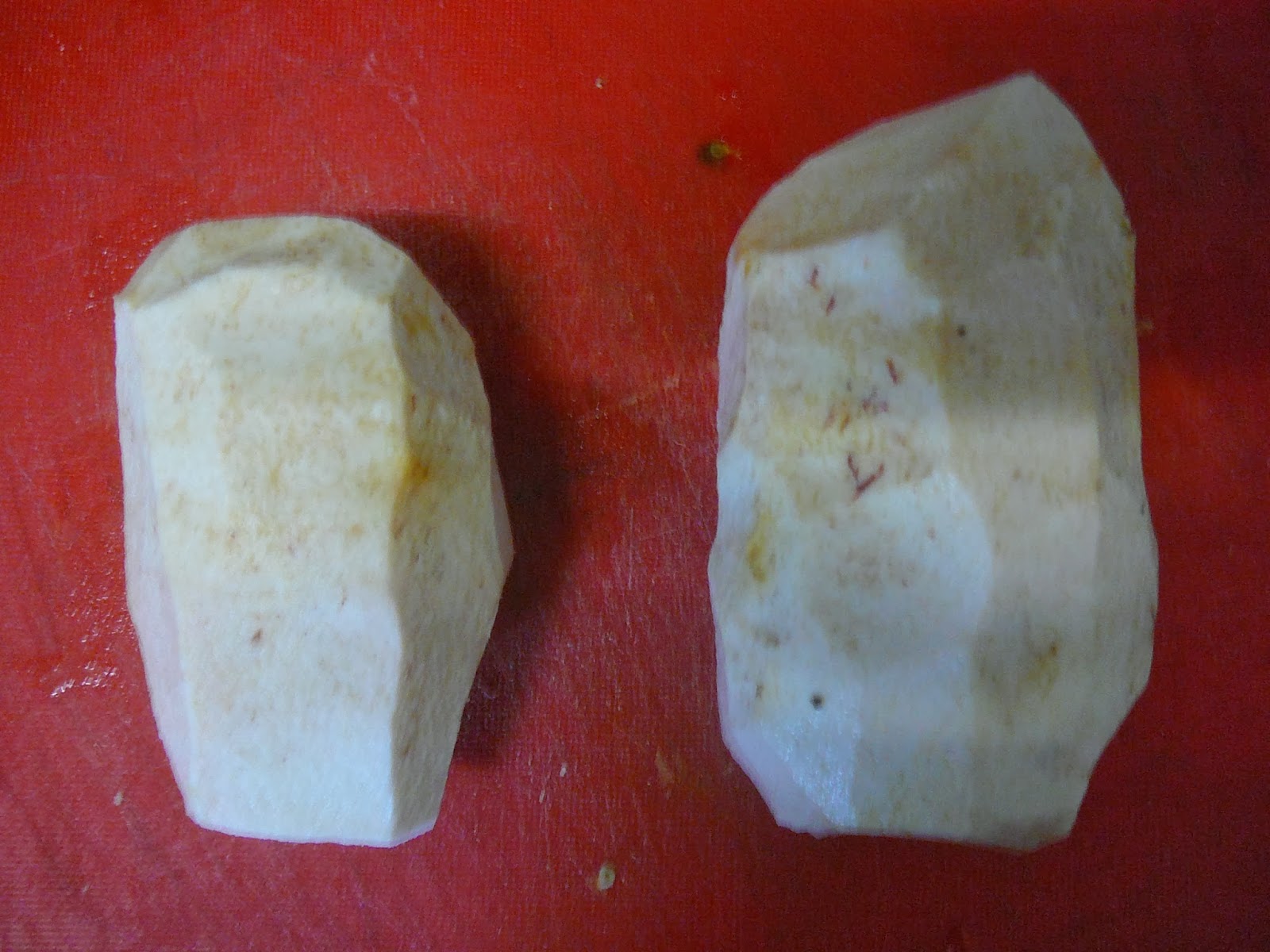 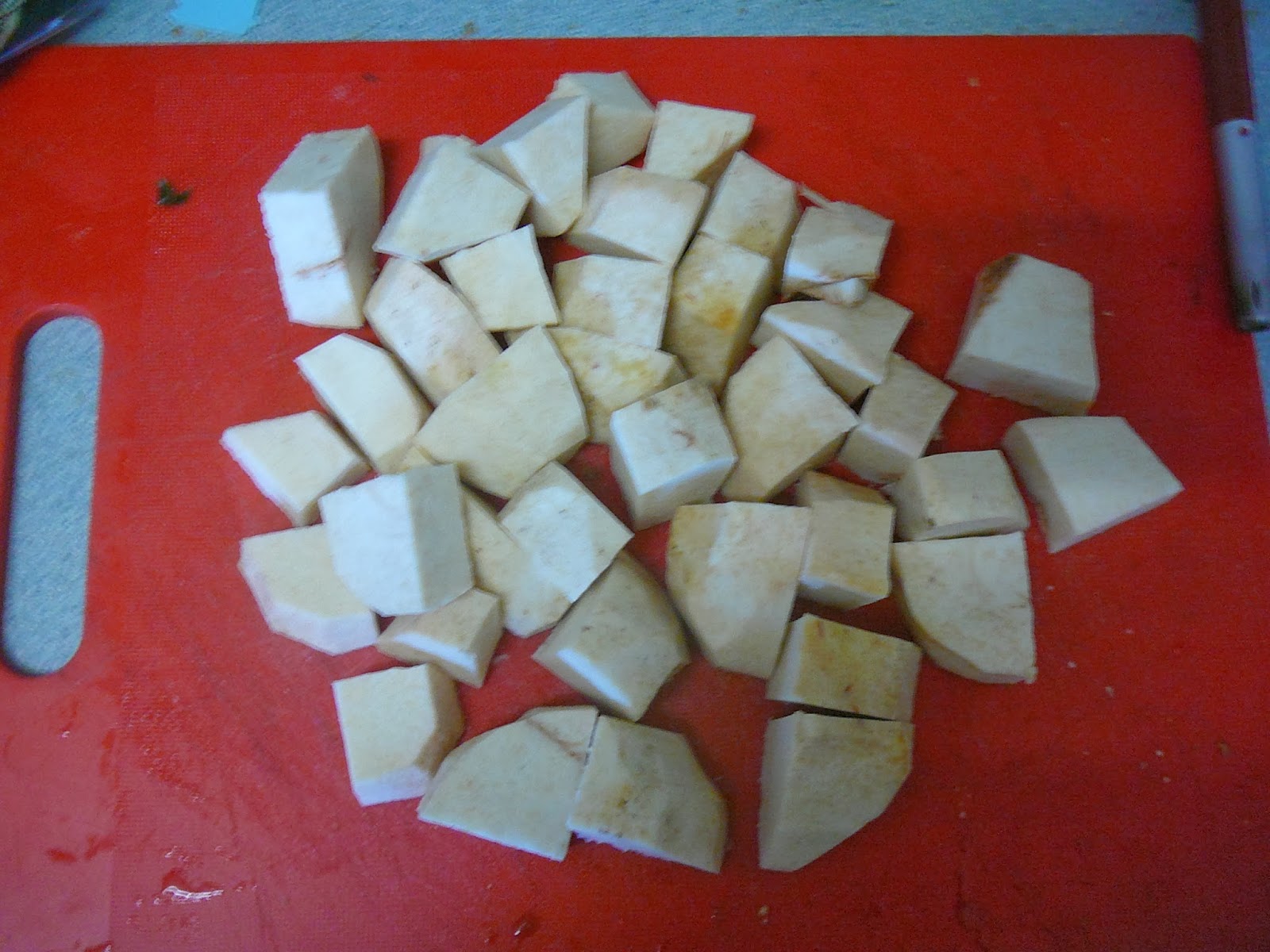 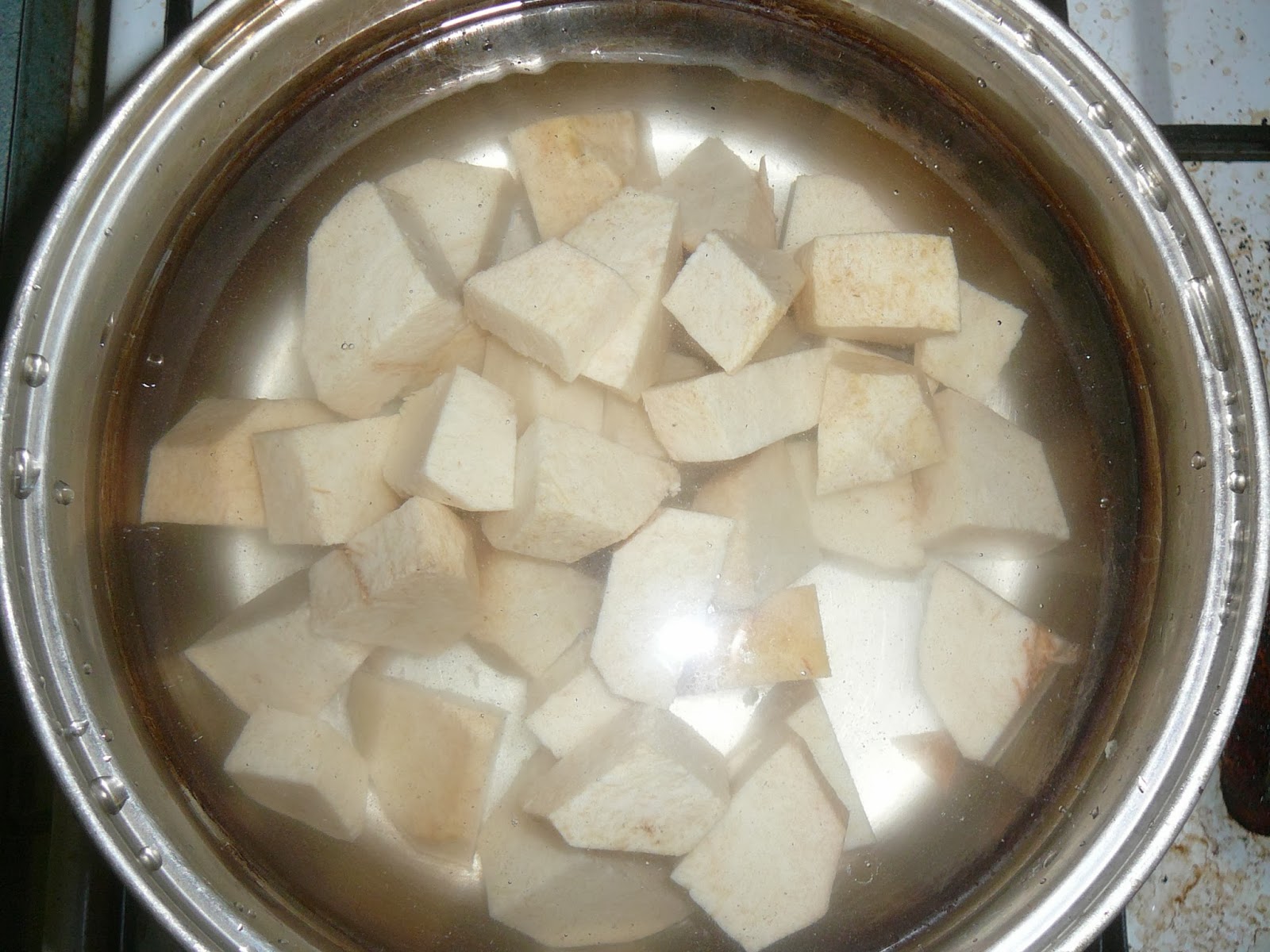 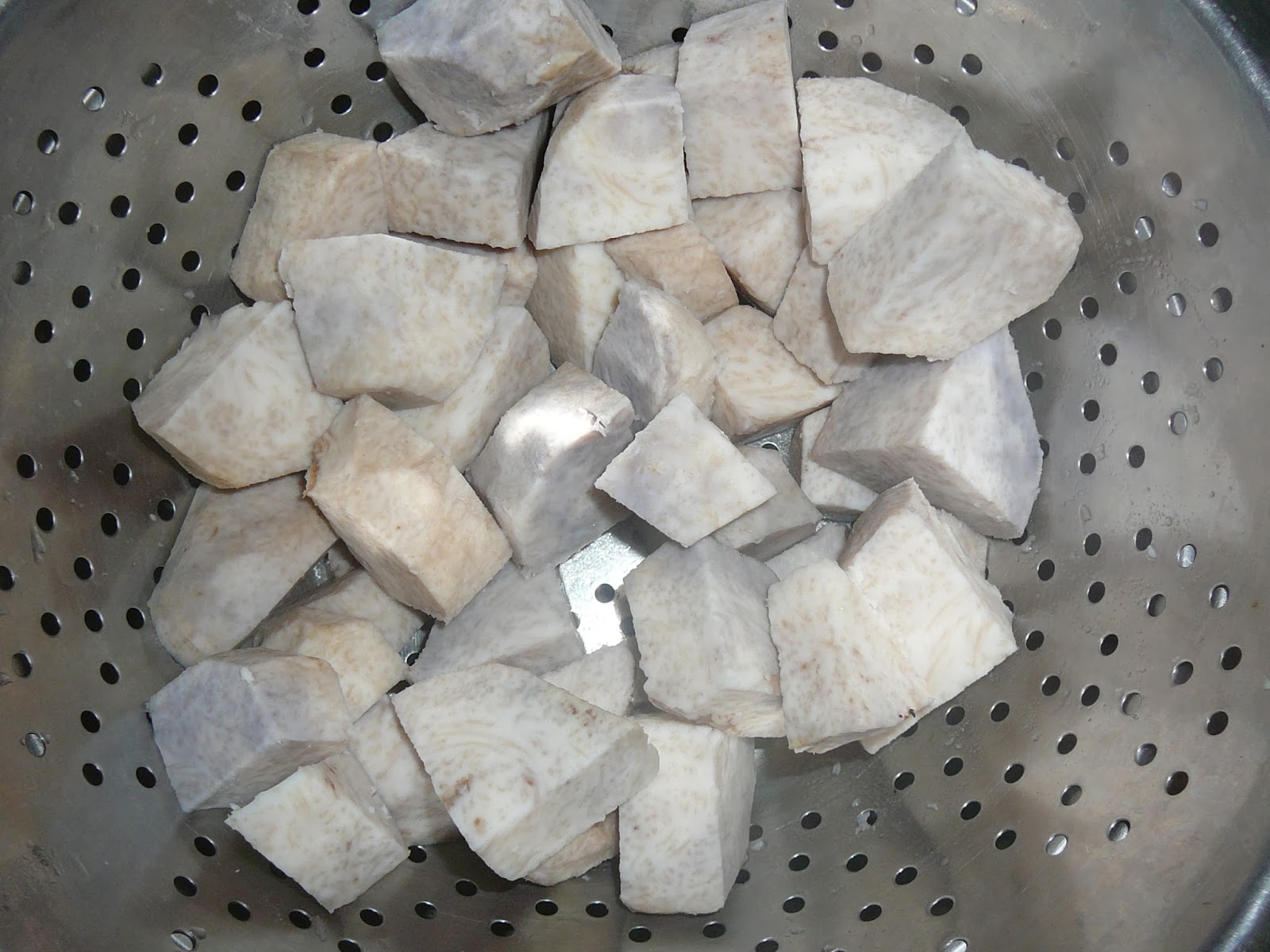 Posted by People Plants Landscapes at 4:22 AM No comments:

Cocoyam or Tannier or Yautia and Goodbye Tahitian Spinach


Yesterday I dug out five or six Tahitian Spinach plants I had tendered carefully for the last 18 months. Tahitian Spinach is a interesting form of Colocasia esculenta. It has very little calcium oxalate in its stems and leaves and can therefore be eaten like spinach without much cooking. In fact you can eat it raw and feel none of that itchiness or pain (!) you would feel from eating any other aroid leaf, including normal Taro. Having experienced the thousand needles piercing my lips after gently chewing a Taro leaf I can vouch for the fact that Tahitian Spinach is quite safe to eat raw although it's not especially appetising. It's stems appear frequently in Vietnamese groceries looking bundles of celery. In fact that's another name for this variety - Celery Stem Taro.

When I first planted Tahitian Spinach I was convinced it would become a summer spinach in my garden...well, there were a few problems. One, I grew too attached to the plants as they developed and couldn't bring myself to cut off the leaves and stems and spoil the look of them underplanted with Brazilian Spinach (see photo). Second, in a relatively dry spot under the plum tree I just couldn't get them lush enough to truly thrive. Lastly, and most importantly I discovered that other Taro leaves, while needing to be cooked, are also a great to eat and you get tubers into the bargain (not so in major way with Tahitian Spinach). And this especially applies to the South American version of Taro, Tannier or Cocoyam or Yautia- Xanthosoma sagittifolium. This is a beautiful plant which I first encountered in Vanuatu where it is mysteriously called Fiji Taro. I've blogged about this before - http://peopleplantslandscapes.blogspot.com.au/2010/11/how-vanuatu-inspired-me-to-grow-taro.html - where I think I may have confused Alocasia spp. with Fiji Taro. Anyway, not to worry I have this all sorted out now.

I bought some very small Tannier several years ago but they were poor specimens, possibly diseased, and I threw them out. The in 2012 I came across some huge specimens in the hills west of Ballina/Byron Bay in Alstonville on a friend's partner's organic farm. I yanked off a few cormels (with permission) and they came back to Melbourne with me. Potted up in winter they emerged in late spring and by autumn 2013 had produced nice sized leaves as the pics reveal. By winter my curiosity got the better of me and I bandicooted (dug) around and broke off a few small sized cormels, which were surprisingly well developed. They tasted great, with a creamier taste than Taro and a smoother texture. I dug them all up and potted up as many cormels as possible. It was time to get into serious production mode with this species. The obvious appeal of course was Tannier is a multi-functional plant that produces edible leaves and stems and delicious tubers.

One of the other great features of Tannier is that it does better in dry soils than Taro and for this reason it has become popular in West Africa where periodic droughts make Taro cultivation difficult in some seasons. So Tannier seemed the no-brainer choice for my planting zone under the plum tree. Hence yesterday morning's manic digging over the bed once the Tahitian Spinach were removed. It's the last month of official summer in Melbourne and it's 37 degrees outside but with about 8 -10 weeks of active growing season left the Tannier or Yautia should look great by May (late autumn).
Posted by People Plants Landscapes at 10:52 PM No comments: