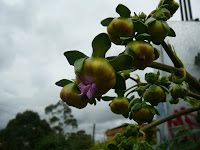 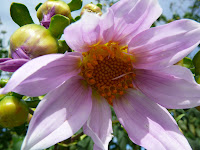 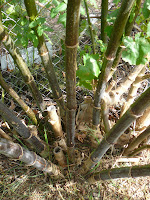 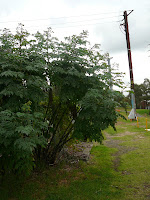 Here's another ornamental plant that has a secret life as an edible plant - the Mexican Tree Dahlia. When Melbourne's weather goes cold and grey, usually sometime in May each year, buds at the end of 3-4 metre tall bamboo-like canes open, revealing large pink, daisy flowers. The flowers float or dangle off the stalks and look beautiful against a soft, grey sky. The strange thing is that the Tree Dahlia's tubers are edible and apparently quite a well-known crop in Central America. The tubers are used like Jerusalem Artichokes, to which  they are related. Both Tree Dahlia and Jerusalem Artichoke tubers are rich in inulin, the fructose sugar not digestible by humans, which has made Jerusalem Artichokes a fashionable 'nutriceutical' diet food. As far as I know, Tree Dahlia has no cultivars; it's certainly very easy to grow. Just cut one of the canes off at the ground during winter, cut it into segments of about 30cm and plonk these straight into the ground. I grew Tree Dahlias years ago and from memory one cutting produced three canes and lots of flowers in one growing season. I have access to several big clumps, so I am going to give the tubers a go in a couple of weeks. If you're very keen to try obscure vegetables, all dahlia tubers are edible, even the most gaudy, over-the-top cultivars and varieties.

(Since writing this post I have changed my mind on edibility/palability of dahlias drastically - see http://peopleplantslandscapes.blogspot.com.au/2014/02/edible-duds-mexican-tree-dahlia.html)
Posted by People Plants Landscapes at 4:01 PM