We often hear about the great reduction in the diversity of foodstuffs available to modern consumers. There are hundreds of varieties of apples (for example), but only four or five apple types that make it into supermarkets. Equally, there are hundreds of edible plant species in the world, many of which are both ancient and popular staples in other countries that we never get to taste, let alone grow.

Well, in fact sometimes we grow these plants as horticultural specimens, having no idea that elsewhere people have been harvesting and eating our garden variety standbys for millennia. One of these is Canna Lily! The Canna Lilies of suburbia, in gardens and parks, are gaudy clumps of bronze-purple, lush looking leaves with huge spikes of over the top orange flowers that glow on a hot Summer's day. They look spectacular, if not a little overwhelming. These types have been bred for their flowers but in South America people have been eating the roots as a starch staple, along with potatoes for thousands of years. 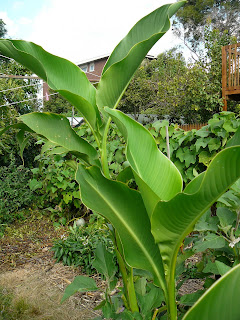 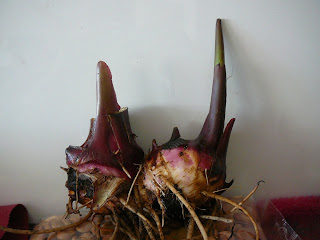 The thought of eating Canna roots so intrigued me I bought 20 rhizomes of Canna edulis/indica from Green Harvest last year and placed them in several food gardens. This Canna species, called Achira in the Andes, has been bred for its edible roots rather than flowers although it still produces lush foliage and small red flowers. My Cannas grew prolifically and looked fantastic growing in amongst traditional vegies but I still couldn't bring myself to enthusiastically munch on Canna roots, especially as they don't look too appetising (see photo).

Last week, however, I got over conservatism and dug up some big roots. I peeled them, cut them into bite-sized chunks for baking and shoved them in the oven. The verdict - they were great! They were road tested on friends who also found them quite more-ish for their strangely sweet, almost cake like qualities (crossed with a potato, perhaps). I'm going to dwell on this description and provide more details on Canna Root Cooking and Canna Lilies in my next post.
Posted by People Plants Landscapes at 2:54 PM